Massachusetts Bill SB 2395, “Relative to Competitively Priced Electricity in the Commonwealth,” was signed into law on August 3, 2012 by Governor Deval Patrick.  The new legislation clarifies some issues related to meeting the Massachusetts Renewable Portfolio Standard (RPS) goal of 22.1% by 2020. Its purpose is to further bolster the existing RPS goals by:  1) increasing the net metering cap; 2) expanding requirements for the EDC long-term contract program and 3) limits entities from owning more than 25 MW of solar. *Please see note below. While this legislation does not explicitly impact the solar carve out portion of the Massachusetts RPS, it does impact net metering policy in MA, a key facet of solar project development. By raising the net metering cap, there is now more room for the development of solar projects at any scale. If development continues to exceed the yearly capacity goals set aside by the DOER, then SREC prices should remain suppressed relative to the SACP.

The legislation doubles the net metering cap to 6%, with 3% allocated for public and private projects each. As Massachusetts was already close to the 3% net metering cap, the bill was essential to ensure renewable energy project development of all types throughout the rest of the year. In addition to the increase in the cap, the bill also states that Class I facilities that are less than 10 kW (single-phase) and <25 kW (3-phase) in capacity will be exempt from the net metering cap altogether. The <10 kW/ 25 kW Class I REC exemption ensures that developers of residential and small commercial facilities will not need to take in to consideration the net metering cap. Class I RECs include RECs produced from most renewable energy technologies (solar, wind, tidal, biomass etc.) that were operational after December 31, 1997. (Source: DSIRE)

Today, the MA DOER announced the 2013 compliance year (January 1 – December 31, 2013) Solar Renewable Energy Credit (SREC) requirement. Massachusetts’ SREC requirement is set each year by a formula that takes into consideration the current year SREC obligation plus the projected SREC generation for the current year less the SRECs generated in prior years multiplied by 1.3. Additional adjustments are then made for prior year’s Alternative Compliance Payment (ACP) volume, banked SREC volume, and DOER Credit Clearinghouse auction volume. The detailed formula for 2013 is as follows:

The MA2013 SREC requirement has been set at 135,495 SRECs. This figure does not take into consideration exempt load based on the TransCanada settlement reached during the first year of the MA SREC market. In the calculation, the DOER provided the effective reduction in SREC Demand for 2013 at 4,784. This means that, under the announced 2013 requirement, the actual number of SRECs needed to be purchased under the 2013 obligation will be equal to 135,495 less 4,784; 130,711 SRECs.

In coordination with its announcement, the DOER also stated its intention to begin a rulemaking process to address the following:

2) Adjust the formula above to remove the term that subtracts “ACP Volume” from prior years.

The DOER noted their plans to begin the rulemaking process in September 2012. The DOER welcomes any comments on the announcement prior to beginning the process. Comments can be sent to DOER.SREC@state.ma.us by 5:00pm on September 14th. 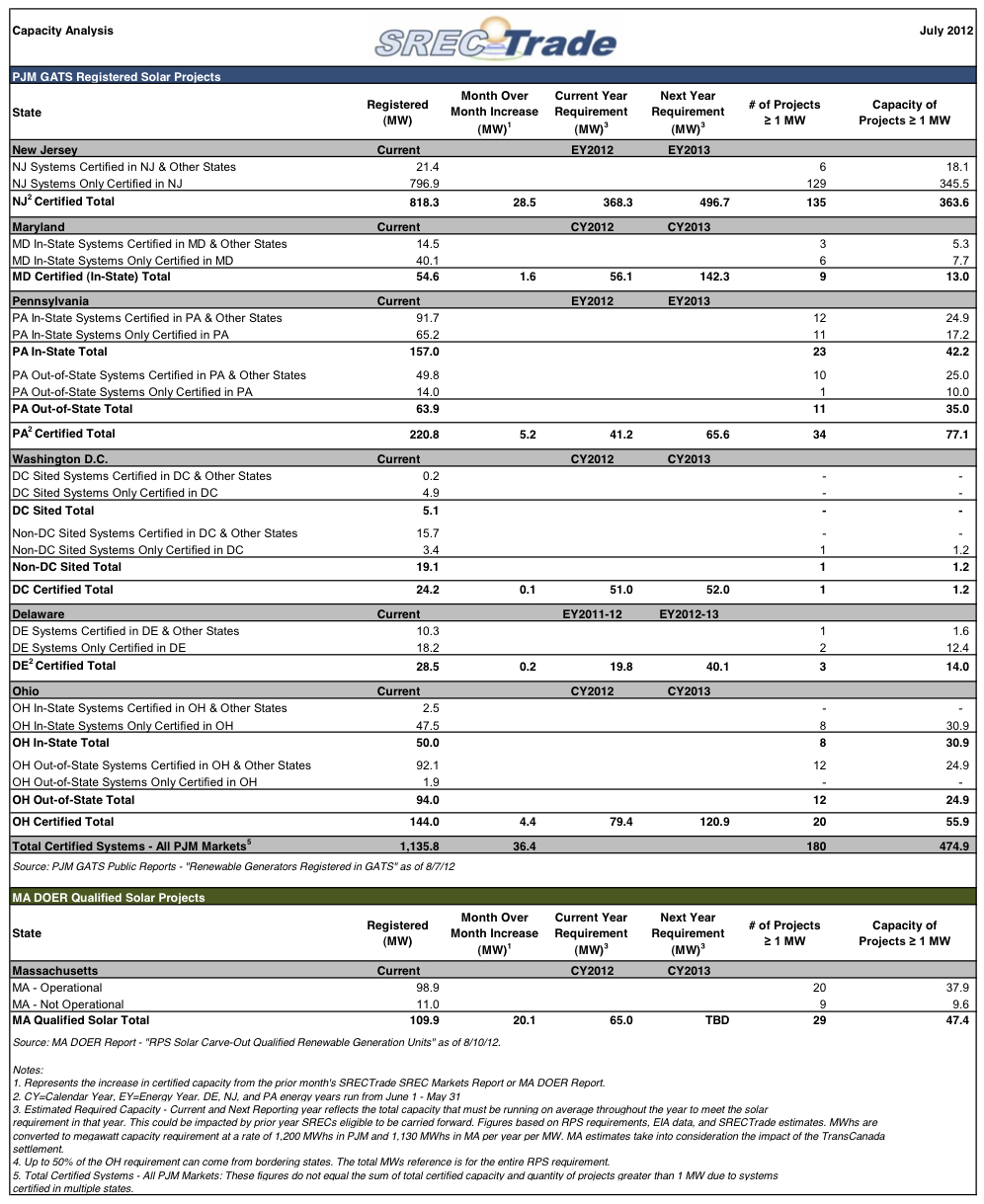 As of this writing, there were 27,262 solar PV and 369 solar thermal systems registered and eligible to create SRECs in the PJM Generation Attribute Tracking System (GATS). Of these eligible systems, 180 (0.65%) have a nameplate capacity of 1 megawatt or greater, of which 17 systems are greater than 5 MW. The largest system, the PSE&G utility pole mount project located in New Jersey, is 25.1 MW, and the second largest, located in New Jersey is 12.5 MW. The third largest system, at 12 MW, is located in Ohio. 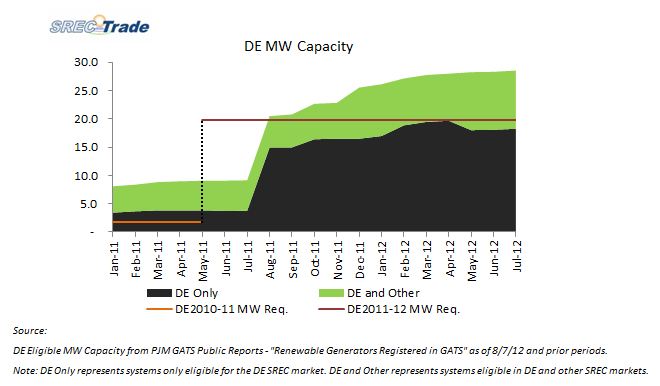 Maryland: As of August 7, 2012, 54.6 MW of MD sited solar capacity was registered to create MD eligible SRECs. The 2012 reporting year requirement for MD equates to approximately 67,310 SRECs being retired. If all retired SRECs were of MD2012 vintage, approximately 56.1 MW would need to be operational all year long. As of August 7, 2012, PJM GATS reported the issuance of approximately 31,200 MD2012 SRECs. Lastly, there are MD sited SRECs available from prior eligible periods, which could be utilized for compliance needs in 2012. 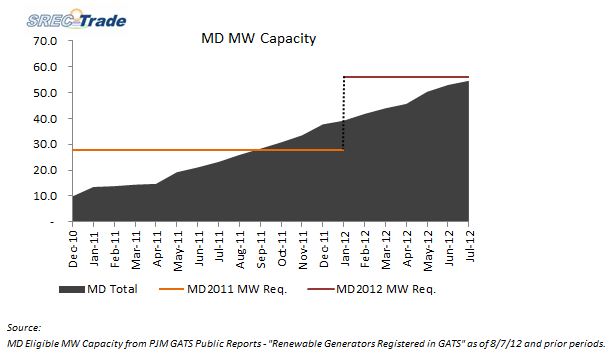 New Jersey: The New Jersey 2012 and 2013 reporting years require 442,000 and 596,000 eligible SRECs, respectively. For 2012, this equates to approximately 368 MW of capacity being operational all year long and 496.7 MW for 2013, assuming all requirements were met with current vintage year SRECs. As of August 7, 2012, 818.3 MW of solar capacity was registered and eligible to create NJ SRECs in PJM GATS. While this figure represents all projects registered in GATS, there are recently installed projects awaiting issuance of a New Jersey state certification number. This delay results in a portion of installed projects not yet represented in the 818.3 MW figure. As of June 30, 2012 the NJ Office of Clean Energy (NJ OCE) reported that 831.6 MW of solar had been installed in NJ. On July 23, NJ Governor, Chris Christie, signed into law legislation to increase the Solar RPS requirements. For details see the following: NJ Governor Christie Signs Bill to Increase Solar Requirements. As of August 7, 2012, PJM GATS reported the issuance of approximately 689,600 NJ2012 SRECs. This figure surpasses the current 2012 compliance year requirement of 442,000 SRECs by approximately 247,600 SRECs. Additionally, the first month of RY2013 generation was issued at the end of July. GATS reported 95,270 NJ2013 SRECs were issued; approximately 16% of the current year’s obligation (not considering the eligible oversupply from NJ2012). 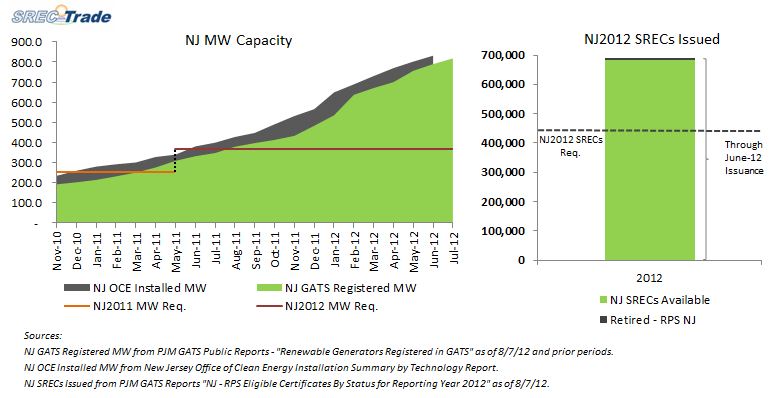 Ohio: Ohio’s 2012 RPS solar target requires approximately 95,300 SRECs to be retired by the end of the compliance period. At least 50% of the SREC requirement must come from systems sited in the state. As of August 7, 2012, 50.0 MW of in-state capacity and 94.0 MW of out-of-state capacity were eligible to generate OH SRECs. As of August 7, 2012, GATS issued approximately 32,190 in-state and 58,630 out-of-state OH2012 eligible SRECs. Additional SRECs from prior years are also eligible for the current compliance period, which may impact the current year’s requirements. 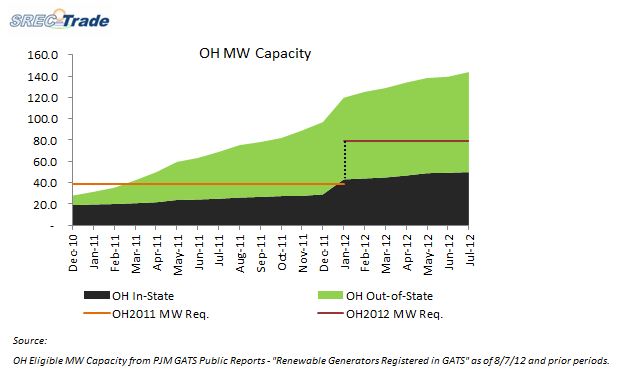 Pennsylvania: The reporting year 2012 and 2013 requirements for PA equates to retiring approximately 49,450 and 78,750 eligible SRECs, respectively. If all compliance obligations were met using 2012 and 2013 vintage SRECs, approximately 41.2 and 65.6 MW would need to be operational all year long within each compliance period. As of August 7, 2012, 220.8 MW of solar capacity was registered and eligible to create PA compliant SRECs. As of August 7, 2012, PJM GATS reported the issuance of approximately 199,000 PA2012 SRECs. Given the oversupply during previous reporting years, there are also SRECs from the 2010 and 2011 reporting years eligible for the PA2012 compliance period. Additionally, the first month of PA2013 generation was issued at the end of July. GATS reported approximately 26,400 PA2013 SRECs were issued. 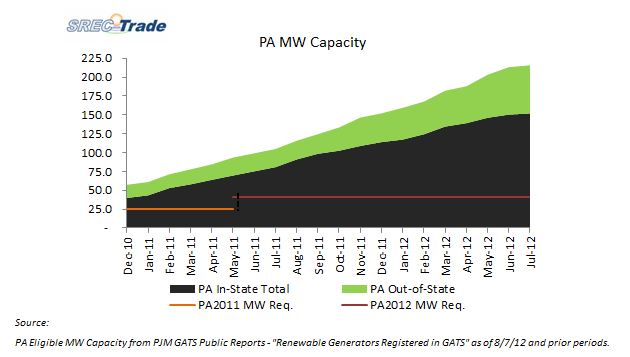 Washington, DC: DC’s 2012 RPS amended solar target requires approximately 61,180 SRECs to be retired by the end of the compliance period. The figures displayed above demonstrate the capacity of systems eligible to create DC SRECs moving forward. These SREC and capacity figures do not take into consideration the amount of electricity delivered into the district that may be exempt from complying with the Distributed Generation Amendment Act increases, considering some electricity contracts may have been signed prior to the amendment’s implementation. As of August 7, 2012, 24.2 MW of capacity was eligible to generate DC SRECs. Additionally, as of August 7, 2012, GATS reported the issuance of approximately 15,000 DC2012 eligible SRECs. SRECs from prior years are also eligible for the current compliance period, which may impact the current year’s requirements. 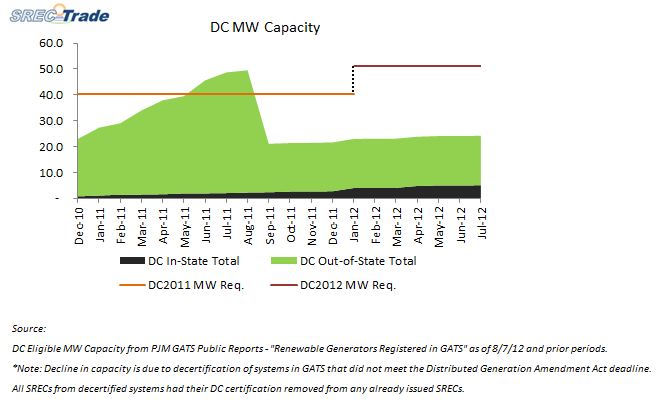 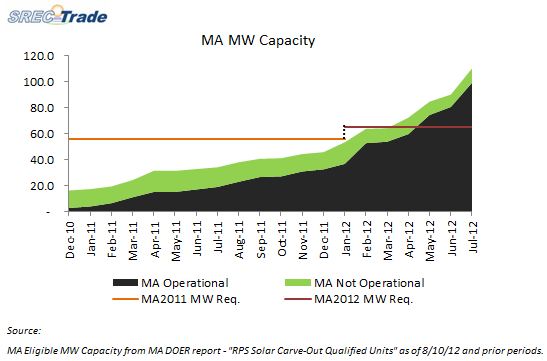