On June 28, 2014, Illinois Governor Pat Quinn signed Illinois House Bill 2427 into law as Public Act 98-0672, creating the new Section 1-56(i) of the Illinois Power Agency Act (“IPA Act”). This Section called upon the Illinois Power Agency (“IPA”) to “develop a one-time supplemental procurement plan limited to the procurement of renewable energy credits, if available, from new or existing photovoltaics, including, but not limited to, distributed photovoltaic generation” using up to $30 million from the Renewable Energy Resources Fund (“RERF”). (20 ILCS 3855/1-56(i)(1)).

As required by Section 1-56(i), the IPA held a workshop on August 7, 2014 and subsequently presented its Draft Supplemental Plan for public comment on September 29, 2014. Comments were received by October 14, 2014, at which point the IPA prepared its revised plan for submission to the Illinois Commerce Commission (“Commission”). Documents related to the August 7th workshop and Draft Supplemental Plan are available here.

On October 28, 2014, the IPA submitted to the Commission its proposed supplemental procurement plan (“Supplemental Plan”). The documents submitted in the Initial ICC Filing are available here. Per the Commission, the Supplemental Plan is designed to “ensure adequate, reliable, affordable, efficient, and environmentally sustainable renewable energy resources (including credits) at the lowest total cost over time, taking into account any benefits of price stability.” (Id.).

The Supplemental Plan defines the products to be procured as “Renewable Energy Credits (“RECs”) from new photovoltaic systems with contracts of five years in length.” The definition of “new” is defined as “energized on or after the date of approval of the Supplemental PV Procurement Plan.”

If there is an outstanding balance of available funds once the three procurement events have taken place, a fourth contingency event will take place in early 2017. The IPA noted in the Supplemental Plan that this event will possibly limit the categories of systems that may participate.

Across the procurement events, there are several key provisions and requirements:

Under Section 1-56(i), the IPA was charged with “solicit[ing] the use of third-party organizations to aggregate distributed renewable energy into groups of no less than one megawatt in installed capacity.” Accordingly, the IPA defined an aggregator “as a third-party (i.e., non-system owner) that (i) owns or plans to acquire either unconditioned title to or rights to legally transfer renewable energy credits from distributed renewable energy devices through contracts with multiple system owners, and (ii) is willing to contract with IPA and accepts standard Illinois terms as well as procedures for contract administration.” In addition to this definition, the IPA proposed that aggregators will be required to pre-qualify with the IPA by meeting the following provisions:

In its Order, the Commission “recommends that the IPA develop a webpage analogous to the Commission’s “Plug In Illinois” webpage to provide basic information in layman’s terms to potential participants in the SREC procurement for 25 kW PV systems.”

In its petition for the Commission’s approval, the IPA recognized that this plan “cannot address all the needs of the market, or overcome all of the barriers[,]” given the limited funds available. However, the IPA is hopeful that the procurement events will serve as a learning opportunity for the future of solar development in the State of Illinois.

The Order requires the IPA to file the final version of the Supplemental Plan, consistent with the conclusions of the Order, within 30 days of January 21, 2015.

*Please Note: The term “bid” as used throughout the Supplemental Plan refers to system owners submitting an offer to sell at a given price.

On January 22, 2015, SRECTrade hosted a webinar on the NJ SREC market. For access to the slides please click here: SRECTrade 01/22/15 NJ SREC Update. For access to a video recording of the webinar, click the image below. Please note, the slides in the link above differ from the recording below. They have been updated to reflect the additional solar capacity installed in December 2014. This announcement was made by the NJ Office of Clean Energy on January 22, 2015.

This document and recording is protected by copyright laws and contains material proprietary to SRECTrade, Inc. It or any components may not be reproduced, republished, distributed, transmitted, displayed, broadcast or otherwise exploited in any manner without the express prior written permission of SRECTrade, Inc. The receipt or possession of this document does not convey any rights to reproduce, disclose, or distribute its contents, or to manufacture, use, or sell anything that it may describe, in whole or in part. If consent to use these materials is granted, a link to the current version of this document on the SRECTrade website must be included for reference.

A group of Maryland renewable energy advocates are proposing to double the state’s Renewable Portfolio Standard in an effort to move forward on clean energy and climate action.

State Sen. Brian Feldman has agreed to sponsor the bill in the Senate, but there is currently no House sponsor. Similar legislation was proposed last session, but to no avail. Additionally, Governor Larry Hogan has not yet provided any insight on the subject.

Feldman said in a statement. “Solar is bigger than the crab industry now in this state. This legislation helps expand that prosperity with a sound policy that creates investment certainty for businesses and consumers.”

Additional information on this matter will be provided as it becomes available.

The following post is a monthly update outlining the megawatts of solar capacity certified to create SRECs in the Solar REC markets that SRECTrade serves. All PJM data is based on the information available in PJM GATS as of the date noted. All MA data is based on the information provided by the DOER as of the date noted. This analysis does not include projects that are not yet registered and certified with the entities noted herein. 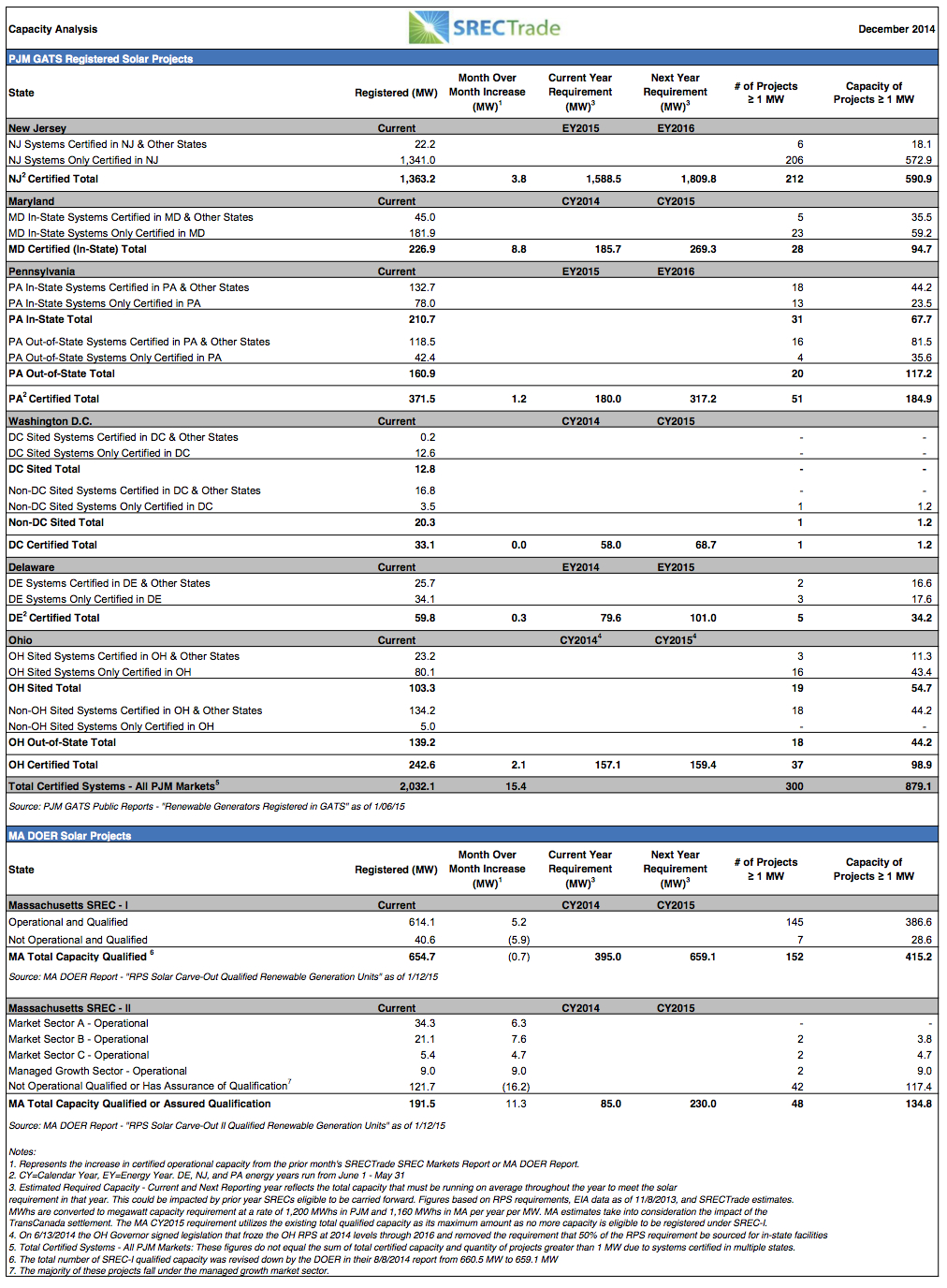 Overview of PJM Eligible Systems Through 1/6/2015

The SREC-II program opened on April 25, 2014. The program is broken in to Market Sectors. For a detailed overview of the regulations regarding SREC-II please visit here. As of 1/12/2015, 191.5 MW of capacity is currently qualified under the SREC-II program, but only 69.8 MW is operational.

The tables above demonstrate the capacity breakout by state. Note, that for all PJM GATS registered projects, each state includes all projects certified to sell into that state. State RPS programs that allow for systems sited in other states to participate have been broken up by systems sited in-state and out-of-state. Additional detail has been provided to demonstrate the total capacity of systems only certified for one specific state market versus being certified for multiple state markets. For example, PA includes projects only certified to sell into the PA SREC market, broken out by in-state and out-of-state systems, as well as projects that are also certified to sell into PA and Other State markets broken out by in state and out of state systems (i.e. OH, DC, MD, DE, NJ). PA Out-of-State includes systems sited in states with their own state SREC market (i.e. DE) as well as systems sited in states that have no SREC market (i.e. VA). Also, it is important to note that the Current Capacity represents the total megawatts eligible to produce and sell SRECs as of the noted date, while the Estimated Required Capacity – Current and Next Reporting Year represents the estimated number of MW that need to be online on average throughout the reporting period to meet the RPS requirement within each state with only that particular compliance period vintage. For example, New Jersey needed approximately 496.7 MW online for the entire 2013 reporting year to meet the RPS requirement with 2013 vintage SRECs only. SRECs still available from prior eligible periods can also impact the Solar RPS requirements. Additionally, the data presented above does not include projects that are in the pipeline or currently going through the registration process in each state program. This data represents specifically the projects that have been approved for the corresponding state SREC markets as of the dates noted.

Note: SREC requirements for markets without fixed SREC targets have been forecast based on EIA Report “Retail Sales of Electricity by State by Provider” updated 11/8/13. Projected SRECs required utilizes the most recent EIA electricity data applying an average 1.5% growth rate per forecast year. The state’s RPS Solar requirement is then multiplied by forecast total electricity sales to arrive at projected SRECs required. Projected capacity required is based on a factor of 1,200 MWh in PJM states and 1,160 MWh in MA, generated per MW of installed capacity per year.

On January 6, 2015, the Patrick Administration announced the final design of a $30 million residential solar loan program aimed to facilitate 6,000 loans over the next three years. The program, a partnership between the Massachusetts Department of Energy Resources (DOER) and MassCEC, will work with local banks and credit unions to provide financing to homeowners interested in solar electrical systems. The loan will expand borrowing options through lower interest rate loans and encourage loans for homeowners with lower income or lower credit scores.

Though loan terms may vary by lender, homeowners who are approved for Mass Solar Loan can expect:

Over the next few months, MassCEC will work to enhance the program website, signup banks and credit unions to participate in this program and develop an online application tool. It is anticipated that the program will begin accepting solar loan applications by Spring 2015.

For more information on this program you can refer to the Mass Solar Loan Webpage and the DOER Final Loan Design Page.

SRECTrade will host a webinar on Thursday, January 22nd at 2 pm ET to review the New Jersey SREC market.

Items to be covered in the webinar:

As of January 8, 2015, below is a summary of indicative pricing across the SREC markets SRECTrade covers (for a PDF copy click here). For January 2015 auction results, scroll down. 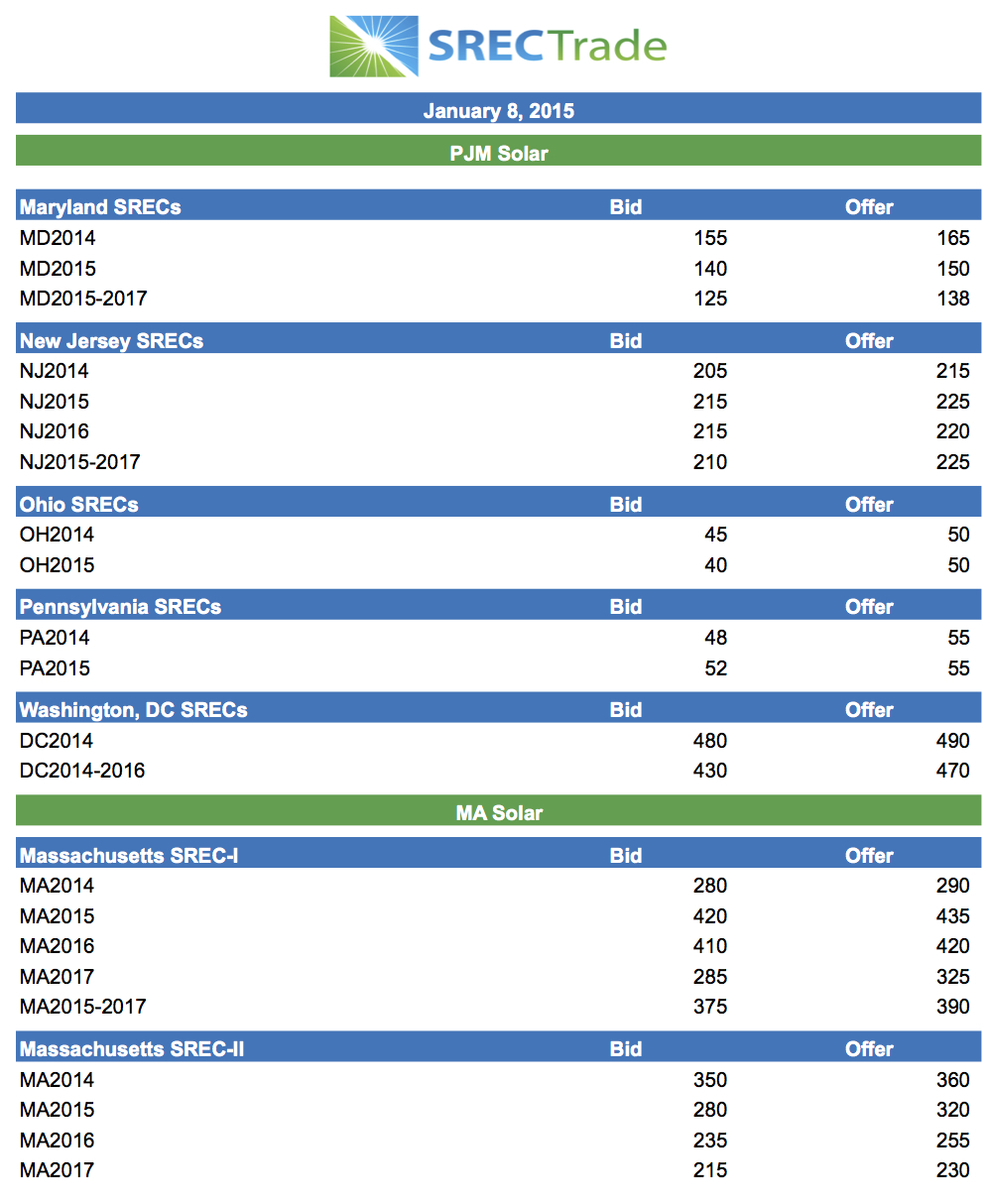 Note: All pricing and notes included are indicative and subject to change. Please contact us for most current markets. If a market is not quoted herein, please contact us directly for further information.

SRECTrade’s January 2015 SREC Auction closed on 1/7/2015. The clearing prices presented below are representative of transactions executed through the SRECTrade auction. This does not include over the counter spot and forward contract transactions completed through SRECTrade’s brokerage desk. For more information on our brokerage services for corporate clients please click here. Below are the clearing prices by vintage across the SRECs transacted in the auction.

*Note: New Jersey pricing is representative of recent transactions executed over the counter prior to the auction close.

This document is protected by copyright laws and contains material proprietary to SRECTrade, Inc. It or any components may not be reproduced, republished, distributed, transmitted, displayed, broadcast or otherwise exploited in any manner without the express prior written permission of SRECTrade, Inc. The receipt or possession of this document does not convey any rights to reproduce, disclose, or distribute its contents, or to manufacture, use, or sell anything that it may describe, in whole or in part. If consent to use these materials is granted, a link to the current version of this document on the SRECTrade website must be included for reference.