Could change be coming to Washington DC’s SREC market?

As you can see from our monthly update on the capacity registered in the SREC states, the DC market has requirements of no more than 8 MW of installations over the next two years. Today, there are over 27 MW currently generating SRECs that are eligible for the DC SREC market. Only 1.1 MW of the 27 MW are actually located within the District. This oversupply and weight towards foreign facilities is likely what prompted the potential legislative changes to the DC SREC market that we highlighted earlier.

This Bill is still in the early stages of the legislative process and it is unknown how long it would be before it is passed. However, it will take several months, at a minimum, before it would go into effect. At this point, it has been referred to the Committee on Public Services and Consumer Affairs, chaired by Councilmember Yvette Alexander who will establish the timing of hearings and markups of legislation.

After the hearing, it will likely go through an iterative process that will take several weeks before it is ready for a vote and another 2-4 weeks before a 2nd and final vote to enact the Bill before it is sent to the Mayor to sign. Once signed by the Mayor, the District must then send it to Congress for a lengthy review period.

The Bill seems to have enough support within the Council to have a good chance of being passed. Which then begs the question, how will they approach the grandfathering of out-of-state facilities that are already registered in DC. There are two important details here. First is the cutoff date. The initial date listed on the proposed Bill was January 31, 2011, however it is likely that if it takes several months to a year to enact the law, the actual cutoff date will be adjusted accordingly. The second detail is what defines “registered”. Would it mean any facility that was built prior to the cutoff date? Or is it any facility that has submitted an application to DC prior to the cutoff date? Or is it any facility that is approved prior to the cutoff date? The problem with the third approach is that the date an application is submitted is within the control of the solar owner, but the date that it is actually certified is not. We think it would be consistent with existing policies that DC would interpret “registered” as the date by which an application is submitted to DC.

SRECTrade will continue to follow the progress of this legislation. Any stakeholders interested in submitting testimony can do so by contacting the office of Councilmember Alexander.

The following post outlines the megawatts of solar capacity certified and/or registered to create SRECs in the SREC markets SRECTrade currently serves. 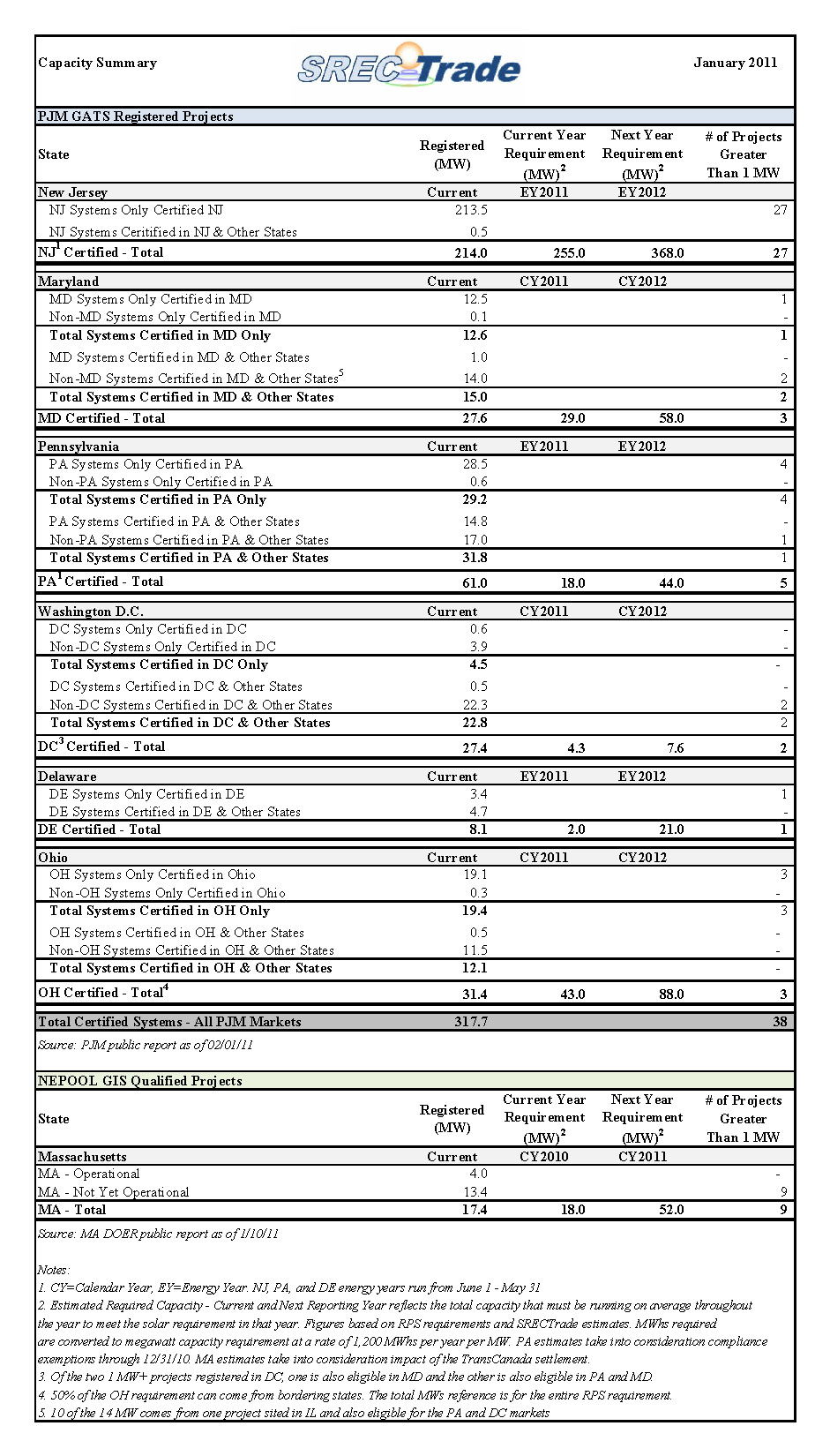 As of the end of January, there were 12,240 solar PV (12,001) and solar thermal (239) systems registered and eligible to create SRECs in the PJM Generation Attribute Tracking System registry. Of these eligible systems, 38 (0.3%) have a nameplate capacity of 1 megawatt or greater, of which only 3 systems are greater than 5 MW. The largest system, currently located in Ohio, is 12 MW,  and the second largest, located in Chicago and eligible for the PA, DC, and MD markets, is 10 MW. The third largest system, located in NJ, is 5.6 MW.

As of January 10, 2011, there were 206 MA DOER qualified solar projects; 183 operational and 23 not operational. Of these qualified systems, 9 (4.4%) have a nameplate capacity of 1 megawatt or greater, of which only 2 are between 1.5 and 2 MW. None of the projects greater than 1 MW are currently operational.

The tables above demonstrate the capacity breakout by state. Note, that for all PJM GATS registered projects, each state includes all projects certified to sell into that state. State RPS programs that allow for systems sited in other states to participate have been broken up by systems sited in state and out of state. Additional detail has been provided to demonstrate the total capacity of systems only certified for one specific state market versus being certified for multiple state markets. For example, PA includes projects only certified to sell into the PA SREC market, broken out by in state and out of state systems, as well as projects that are also certified to sell into PA and Other State markets broken out by in state and out of state systems (i.e. OH, DC, MD, DE, NJ). PA Out of State includes systems sited in states with their own state SREC market (i.e. DE) as well as systems sited in states that have no SREC market (i.e. VA). Also, it is important to note that the Current Capacity represents the total megawatts eligible to produce and sell SRECs as of the noted date, while the Estimated Required Capacity – Current and Next Reporting Year represents the estimated number of MW that need to be online on average throughout the reporting period to meet the RPS requirement within each state. For example, New Jersey needs approximately 255 MW online for the entire 2011 reporting year to meet the RPS requirement. Additionally, the data presented above does not include projects that are in the pipeline or currently going through the registration process in each state program. This data represents specifically the projects that have been approved for the corresponding state SREC markets as of the date noted.

As we have written previously, the DOER’s Massachusetts Solar Carve-out has established an SREC market that could become the model that many states move towards in order to promote solar in the U.S. For an industry accustomed to the promotion of the feed-in tariff model, the Massachusetts market represents a hybrid between the market-based approach of SREC programs popular on the East Coast and the fixed-subsidy approach of the feed-in tariff model popular in Europe, though nearly non-existent in the U.S.

Through the use of a ceiling price set by a $600 SACP and a floor price set by a $300 last chance auction mechanism, the DOER is able to keep SREC prices within a manageable range. One of the significant caveats of the rules by which the DOER implements the solar carve-out is that it can, at its discretion (and with proof of justification) reduce the SACP by up to 10% in any given year. That announcement needs to be made by January 31st of that year and the DOER did just that yesterday on January 31st, 2011

According to the DOER, the ACP will drop by $50 from $600 to $550 for the 2011 SREC year. This means that any SRECs generated beginning in January and subsequently created beginning in July will have a ceiling of $550 instead of $600. The announcement and justification are found here:

January 31, 2011
DOER is authorized under 225 CMR 14.08(3)(b)2 to reduce the Alternative Compliance Payment (ACP) rate pertaining to the Solar Carve-Out portion of the RPS Class I obligation. Any such rate reduction may be no more than 10% in any one Compliance Year, must be announced by January 31st of that year, and must be accompanied by an explanation.

DOER hereby reduces the Solar Carve-Out ACP Rate to $550 per MWh, down by 8.3% from the program’s 2010 initial rate of $600/MWh. The new $550/MWh rate is effective for Compliance Year 2011 and thereafter, unless and until DOER makes a further reduction by January 31st of any subsequent year.

DOER has reached this decision after careful consideration and deliberation on the market conditions facing solar development in Massachusetts since 2009, when the original $600 ACP level was set. During this time, solar developers have enjoyed declining PV module costs and have used conservative financial assumptions.

Globally, over the past two years, PV module prices have experienced significant price drops, and some European solar feed-in tariff rates have been reduced. Locally, installed costs for projects qualified for the Solar Carve-Out have trended downward between 5% and 10% since the beginning of the program. Elsewhere, Lawrence Berkeley Laboratory reports installed solar PV prices dropping in 2010 about $1/W in the major PV markets in California and New Jersey (http://eetd.lbl.gov/ea/ems/reports/lbnl-4121e.pdf). DOER remains committed to the growth of our solar market and to achieving this growth at lowest cost to Massachusetts electric customers.

The discretion of the DOER in making this change has been clear from the rules set at the outset of the program. It is surprising that this adjustment would happen so early in the adoption of the program, particularly given the shortfall of SRECs in Massachusetts in the first year of the program. However, the 2010 shortage is not necessarily a reflection of the feasibility of financing solar in Massachusetts with the solar carve-out in place. It likely has more to do with the amount of time it takes to implement the program logistically, the time it takes to educate stakeholders, and the time it takes to go to the retail and institutional markets with the new, SREC-driven economics. In the states that have come before, the full adoption of SREC-based economics has taken 3-4 years. Ohio is a full two-years into the program and the industry is still catching up (though Ohio’s problem has more to do with a flawed design). Massachusetts may see adoption quicker given a growing industry consciousness around SRECs and a program that can *almost* be simply described as you install solar, you get back $300-$600 per megawatt-hour that your system produces in addition to your electricity savings/sales for 10-years.

That *almost* is where we are today as the implications of a reduced SACP brings some of the caveats of the program to the forefront. That range of pricing has now been squeezed to $300-$550, and it also means that anyone following the SREC market should start to wonder if $550 will be $500 in 2012 and $450 in 2013 and at some point this just turns into a fixed feed-in tariff at $300. One thing is clear: the DOER has created a program that gives it the levers necessary to make it flexible enough to keep pace with solar industry trends and that the DOER will not hesitate to pull those levers.

As we mentioned, the ability of the DOER to adjust the ceiling price was apparent in the rules, but there is no mention that anything can be done to change the $300 fixed-price in the last chance auction. We believe that this was a cornerstone to the program. And the only apparent variable with the floor price is the Opt-In term which sets the number of years a facility may be eligible for the last-chance auction – initially set at 10 years.

Finally, as the largest aggregation and market in Massachusetts, SRECTrade has been partnering with buyers to extend various options to our network of installers. These options now include upfront payments and 5-year+ fixed-price contracts for facilities of all sizes. Our goal is to ensure that our customers have every possible option available when making a decision on how best to go solar with the Massachusetts solar carve-out. Installers can learn about joining our network here: SRECTrade Installer Network.