A segment of the California solar industry got a small boost last week as the CPUC approved the TREC program in California. This was essentially a re-affirmation of the original TREC order in March, 2010.

Unfortunately, the TREC market is geared towards large solar farms and not accessible to the rest of the solar industry. The biggest problem is that TRECs can only be produced by “RPS-Eligible” facilities and California currently excludes “Distributed Generation” from RPS Eligibility. The rules are loosely written to define Distributed Generation as coming from facilities where the energy is used close to the source. This pretty much limits the TREC market to solar farms and the companies that build a business out of creating more utility companies (the solar kind). This is somewhat counter-intuitive to the benefits that tradable REC markets bring to promoting local, distributed generation, a reduced reliance on the grid, and the safety of distributed power sources – not to mention all the small businesses that pop-up to support the growth. Either way, this is a decision for the California Energy Commission (CEC).

In addition to the RPS-Eligibility issue, a couple things need to change prior to this having a substantial impact on the solar industry in general. First, the $50/MWh cap on the price of TRECs will not be effective in promoting small-scale solar. The relatively minimal amount of energy generated by rooftop facilities and the amount of effort required to register and sell the TRECs makes it difficult to justify the benefits. The good news is that this cap will be removed in 2014.

The second issue with the legislation is that it creates a generic REC market where solar competes with wind, hydro and other renewable technologies that operate on a scale that is unmatched by solar. This makes it very difficult for the small players looking for access to this market in order to finance solar projects. The only “REC” markets that have been successful in promoting retail residential and commercial solar is an “SREC” market.

As with many states before it, California is taking a cautious approach to implementing TRECs. Hopefully by 2014, the state will make the necessary changes to make this a market that can serve as the foundation of the entire California solar industry. In doing so, it will take a step towards keeping pace with the SREC states on the East Coast. The 33% target in California is aggressive and if solar is going to be a big part of the mix, then the state will need to find a market-based, sustainable solution beyond the budget of the CSI and the pitfalls of the FiT mechanisms so often promoted by industry advocacy groups.

Meanwhile, California solar owners should keep an eye on the other SREC markets. North Carolina in particular is an open market that takes SRECs from out-of-state. The only issue is that, since it is open to everyone, it has gotten oversubscribed pretty quickly. Either way, the takeaway is that opportunities will develop, even if it is outside California, so it does make sense to register if you have a facility in the ground already.

Here is some more information on the most recent decision:

The TREC legislation had been held up by a joint petition of the utility companies essentially lobbying to allow them to procure the RECs from out-of-state, presumably at a cheaper cost. That petition has now been denied and California is back to implementing a TREC program, after a 9 months delay.

The new TREC order of January, 2011. includes the following rules:

1. TRECs can be created by RPS-Eligible facilities (Distributed Generation is excluded)

2. TREC trading begins on the effective date of the decision: January 13, 2011

3. TRECs can be created dating back to the beginning of 2008

6. If your facility is in a bundled contract, you can unbundle the electricity and trade your RECs separately unless your contract was signed prior to 2005 with California RPS-obligated LSEs (unless stated otherwise in the contract) or if your contract is associated with RPS-eligible energy pursuant to the Federal PURPA Act.

7. TRECs have a 3-year life, inclusive of the year in which it was created

8. LSEs can procure up to 25% of their obligation from TRECs, the rest must come from bundled electricity sales from within their territory. This cap will remain in place until 2014

The recognition of out-of-state SRECs in Maryland has been a fairly ambiguous topic for quite some time now. According to the RPS solar carve-out law in Maryland, statute §7–701:

(i)“Renewable energy credit” or “credit” means a credit equal to the generation attributes of 1 megawatt–hour of electricity that is derived from a Tier 1 renewable source or a Tier 2 renewable source that is located:

(2)   outside the area described in item (1) of this subsection but in a control area that is adjacent to the PJM region, if the electricity is delivered into the PJM region.

This means that Maryland buyers can procure SRECs from anywhere in the PJM region or a “control area” bordering the region if the electricity is delivered into the region.

“On or before December 31, 2011, energy from a Tier 1 renewable source under § 7–701(l)(1) of this subtitle that is not connected with the electric distribution grid serving Maryland is eligible for inclusion in meeting the renewable energy portfolio standard only if offers for solar credits from Maryland grid sources are not made to the electricity supplier that would satisfy requirements under the standard and only to the extent that such offers are not made.”

Our interpretation: If you’re not connected to the electricity grid serving Maryland, it’s probably not worth the trouble to apply. For starters, if you can sell them, your SRECs are only usable in 2011. In addition, the buyer would need to provide proof that they can’t procure SRECs from within the grid serving Maryland. Assuming that this refers to the PJM Region, then it is highly unlikely that buyers in Maryland would not be able to procure SRECs from within the grid. And finally, onerous requirements like “Mail the original and 14 paper copies of all documents” in the Maryland application process make it one of the most tedious state certifications out there.

While we can’t predict how buyers view out-of-state SRECs in Maryland, we now have an in-state/out-of-state option for buyers in the Maryland SREC auction. If you have a facility that is located in the PJM region, we would encourage you to apply to the Maryland SREC market (despite the impact that 14 copy requirement might have on the environment). Instructions can be found on our State Certifications page. We can also do it for a fee if you are an EasyREC customer.

Washington, DC Councilmember Mary M. Cheh has introduced a Bill to amend the solar carve-out in the District. It is called the Distributed Generation Amendment Act of 2011. The announcement can be found here. Among the changes, the most notable will restrict the DC SREC market to facilities located in the District, starting in 2012. The Bill will grandfather any facilities registered in DC prior to January 31, 2011. In addition to this notable change, the requirements in each year will increase significantly through 2020 and the SACP will be extended until 2020. Here are the key details:

1. Facilities sited outside D.C. will remain eligible as long as they were registered with the D.C. Public Service Commission prior to January 31, 2011.

2. Starting in 2011, solar requirements will increase as follows:

This is good news for what has been an oversubscribed D.C. SREC market, though it will have a negative impact on facilities across the region that will not be registered by January 31, 2011. Facilities that are registered and included after any changes are made will benefit from inclusion in the D.C. SREC market which should see a rebound in pricing. Unlike the unsuccessful efforts of Pennsylvania earlier this year to exclude out-of-state facilities, this effort by D.C. has been done with the consideration of the solar owners that have committed to solar on account of the opportunity to sell SRECs in D.C. Regardless of the merits of a move to a closed SREC market, the inclusion of previously registered facilities is a crucial aspect of any changes that are made.

Note: It is still too early to tell if this Bill will pass. It is highly unlikely that it would be passed before January 31. Therefore it is unclear what the deadline will be if/when such a bill were to pass. Anyone considering submitting an application to the D.C. market that should file one directly with the D.C. Public Service Commission. Instructions can be found on our State Certifications page.

As part of our aggregation services, SRECTrade offers online access to generation data for EasyREC customers. This makes for one simple interface to track and manage all SREC related activity on SRECTrade.com. Once set up, customers can view their generation history by simply logging into their account. Below is a preview of what customers see in their online EasyREC accounts. To learn more click here. 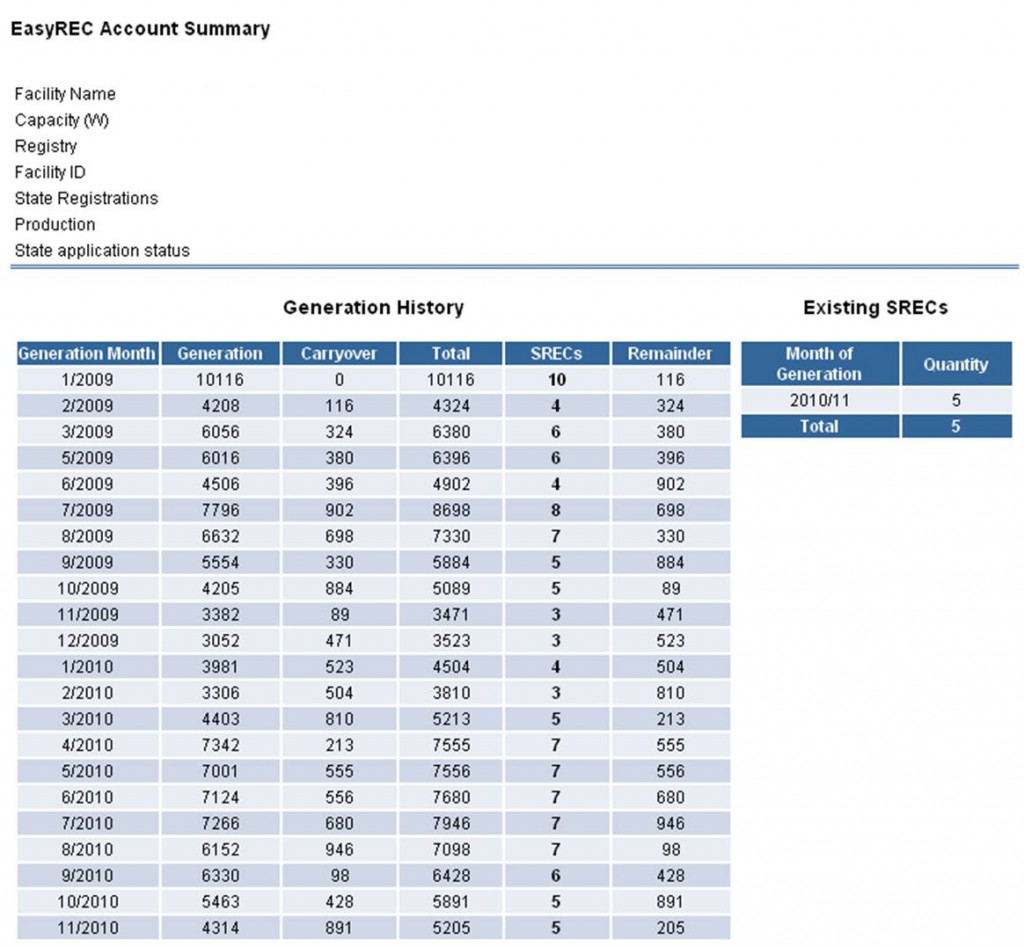 The following post outlines the megawatts of solar capacity certified and/or registered to create SRECs in the SREC markets SRECTrade currently serves.

As of the end of December, there were 11,241 solar PV (11,015) and solar thermal (226) systems registered and eligible to create SRECs in the PJM Generation Attribute Tracking System registry. Of these eligible systems, 35 (~0.3%) have a nameplate capacity of 1 megawatt or greater, of which only 3 systems are greater than 5 MW. The largest system, currently located in Ohio, is 12 MW,  and the second largest, located in Chicago and eligible for the PA and DC markets, is 10 MW. The third largest system, located in NJ, is 5.6 MW.

As of December 10, 2010, there were 180 MA DOER qualified solar projects; 156 operational and 24 not operational. Of these qualified systems, 9 (~5.0%) have a nameplate capacity of 1 megawatt or greater, of which only 2 are between 1.5 and 2 MW. None of the projects greater than 1 MW are currently operational.

The tables below demonstrate the capacity breakout by state. Note, that for all PJM GATS registered projects, each state includes all projects certified to sell into that state. State RPS programs that allow for systems sited in other states to participate have been broken up by systems sited in state and out of state. For example, PA In State includes projects eligible to sell into the PA SREC market as well as projects that may also be eligible to sell into OH and DC. PA Out of State includes systems sited in states with their own state SREC market (i.e. DE) as well as systems sited in states that have no SREC market (i.e. VA). Also, it is important to note that the Current Capacity represents the total megawatts eligible to produce and sell SRECs as of the noted date, while the Estimated Required Capacity – Current and Next Reporting Year represents the estimated number of MW that need to be online on average throughout the reporting period to meet the RPS requirement within each state. For example, New Jersey needs approximately 255 MW online for the entire 2011 reporting year to meet the RPS requirement. Additionally, the data presented below does not include projects that are in the pipeline or currently going through the registration process in each state program. This data represents specifically the projects that have been approved for the corresponding state SREC markets to date. 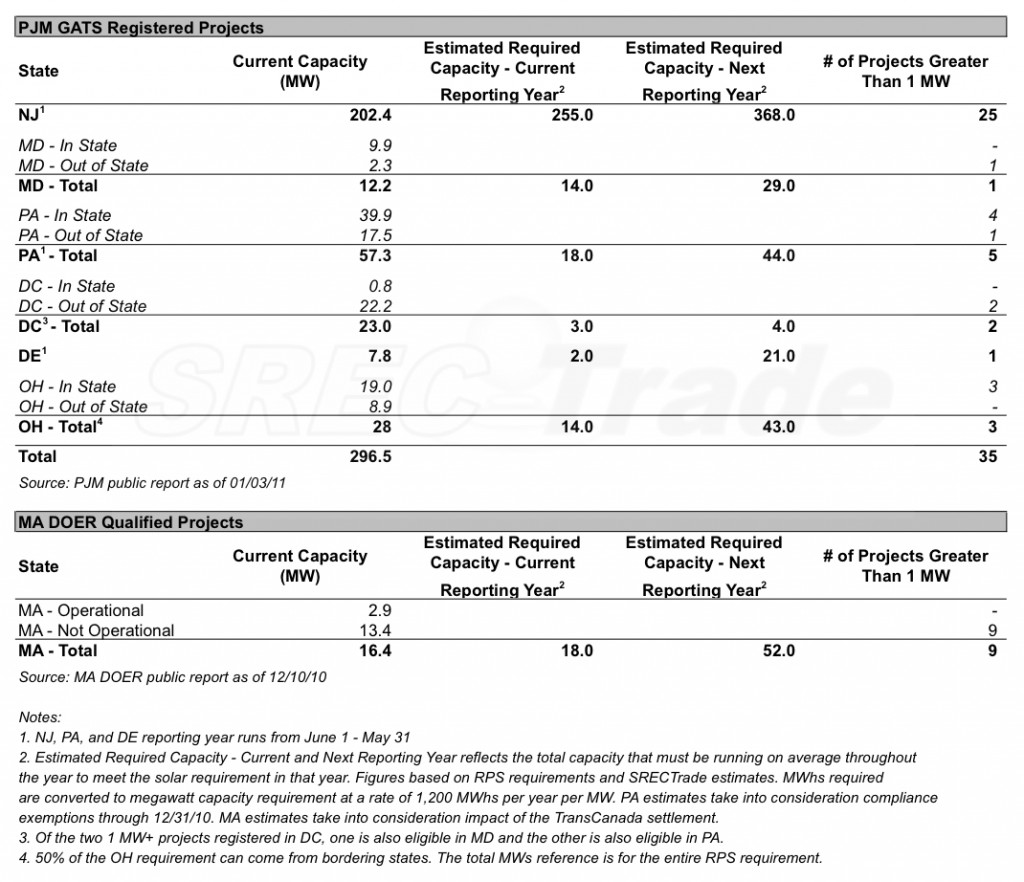