With regards to the state’s RPS, the Bill lowers the renewable energy target from 12.5% to 8.5% by 2026, and eliminates the solar-carve out all-together from 2020 onward. As such, solar assets currently registered in the OH SREC market will no longer produce OH SRECs after 2019. Please feel free to reach out to the SRECTrade team for more information regarding this transition and impact on your eligibility.

On April 8th, the Clean Energy Jobs Act (CEJA) passed the Maryland House of Delegates, 95-40, and Senate, 31-15, respectively. Most notably, the Bill increases the state’s renewable energy mandate from 25% to 50% by 2030. The in-state solar carve-out follows suit, raising the 2019 solar carve-out to 5.5%, increasing to 14.5% by 2028. The solar carve-out and Solar Alternative Compliance Penalty (SACP) schedule is amended as follows:

The bill now heads to Governor Larry Hogan’s desk, where he has the option to either sign, veto, or let the bill go into law without his signature. While uncertainty remains on Governor Hogan’s view on the legislation, some believe his recently shared perspective demonstrates positive support.

SRECTrade will continue to monitor the situation and provide further analysis if and when the Bill goes into law.

Specifically, the emergency regulation cancels the transition from pre-minting to forward minting for all small (residential) renewable thermal technologies. As such, small systems will continue to receive their credits upfront, in lump-sum. These proposed changes will take effect immediately and remain in effect for three months. If the DOER successfully concludes the entire rulemaking process within the next three months, the emergency amendments will become law.

SRECTrade provides comprehensive management and transaction services for renewable thermal asset owners within the APS program. Please reach out to SRECTrade if you believe you are eligible or have any questions regarding the program.

Notably, the state’s solar carve-out requirement is raised and accelerated to 5.1 percent of total electricity sales by EY2021 before beginning to ramp-down in 2024. The requirement ramps down in consideration of solar facilities that will be reaching the end of their 15-year SREC production eligibility term. 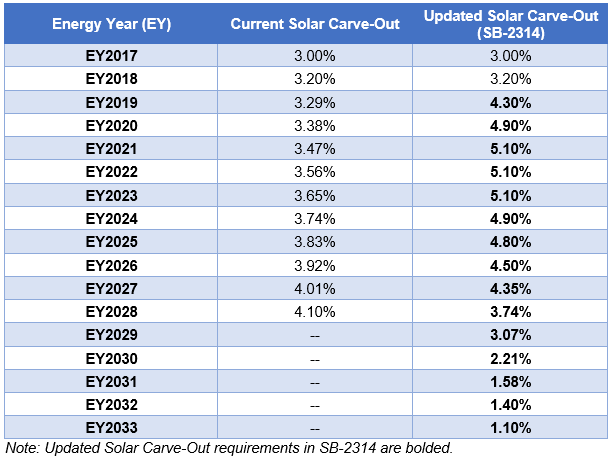 On the other hand, the bill lowers the solar alternative compliance payment (SACP) schedule to $268.00 in EY2019 with an additional $10.00 reduction each following year. 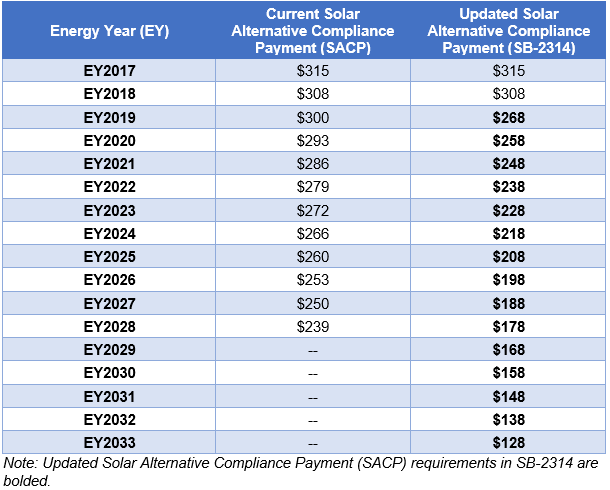 The bill also shortens the 15-year period that qualified solar projects can generate solar renewable energy credits (SREC) to ten years, effective for all New Jersey SREC Registration Program applications received as of the enactment date. Lastly, the bill mandates that the current SREC program be closed upon reaching the 5.1 percent target and no later than June 1, 2021. It is anticipated that a supplemental “SREC-II” program will follow shortly after the closure of the first program.

The bill also introduces other clean energy initiatives, including:

Simultaneously, Gov. Murphy signed Executive Order No. 28, requiring state agencies to update the Energy Master Plan (EMP) that prepares a strategy for achieving 100 percent clean energy by January 1, 2050. The new EMP is scheduled to be finalized and published by June 1, 2019.

For more information on the bill and its passage through the New Jersey legislature, please visit our previous blog post on the topic here. SRECTrade expects to publish a detailed New Jersey supply and demand analysis reflecting this new legislation soon.

On Thursday, May 3rd, the Pennsylvania Public Utilities Commission (PUC) entered its Final Implementation Order of Act 40 of 2017, clarifying some questions that remained from its adoption of the Final Implementation Order. Notably, the entry confirmed that PA-certified but out-of-state facilities would not be grandfathered with solar renewable energy credit (SREC) eligibility (i.e. Tier I solar), since the PUC found that grandfathering these facilities would result in minimal improvement for state SREC prices and fail to effectuate the intentions of the PA General Assembly.

The entry also clarified that PA SRECs associated with energy generated after October 30, 2017 would be re-certified to non-solar RECs (i.e. Tier I non-solar). The PA REC Program Administrator and PJM GATS have already worked together to modify the Tier I certification numbers attributed to all out-of-state facilities and SRECs that no longer qualify for Tier I solar eligibility. This means that SRECs with a Month of Generation of November 2017 and later have now been re-certified as Tier I non-solar RECs.

Some facilities that were re-certified with Tier I non-solar eligibility will be permitted to temporarily maintain SREC certification if under an SREC contract with an electric distribution company (EDC) or electric generation supplier (EGS) serving PA customers. EDCs and EGSs seeking to qualify contracted RECs as Tier I solar-eligible under the Final Implementation Order’s ruling must file a petition within 60 days of the entry date of the Order (May 3rd). Please note that such facilities will only be permitted to maintain certification until the expiration of the SREC contract.

Moving forward, it appears that the PA REC Program Administrator will be responsible for working with PJM GATS to re-certify SREC-contracted facilities for Tier I non-solar REC generation once their contract term expires.

Additionally, the entry clarified that:

Solar facilities that meet the two Section 2804(2)(ii) criteria listed above are limited to maintaining certification only for the applicable amount of Solar Renewable Energy Credits (SRECs) contractually committed to an EDC or EGS. EDCs and EGSs seeking to qualify SRECs under this interpretation must file a Petition with 60 days of the entry date of the Order.

In addition, the Order clarified that SRECs generated by certified but out-of-state facilities prior to October 30, 2017 will retain their Tier I solar qualification for their standard banking lifetime (current reporting year and following two). The Order did not clarify whether SRECs generated by such facilities after October 30, 2017 will also be able to retain their Tier I solar qualification.

At this time, it is unclear how implementation of these interpretations will be administered. SRECTrade will continue to monitor the proceedings and provide updates as they become available.

On Thursday, April 12th, the New Jersey Assembly and Senate passed Assembly Bill 3723 (AB-3723) and Senate Bill 2314 (SB-2314). The bill now sits on the desk of Governor Phil Murphy (Dem) waiting to be signed, after passing the Assembly by a margin of 49-20-2 and the Senate by a margin of 29-8. The bill requires a number of action items to be carried out, including:

The bill requires 21% of statewide electricity sales to be derived from Class I renewable energy sources by January 1, 2020, 35% by January 1, 2025, and 50% by January 1, 2030. The cost of this requirement shall not exceed 9% of the electricity purchased by all NJ ratepayers for each energy year 2019-2021 and shall not exceed 7% in each energy year thereafter. In addition, all facilities filing SREC applications after the bill’s enactment date will be subject to a reduced SREC eligibility term of 10 years, down from 15.

No later than 180 days after the enactment of the bill, the board will implement rules to close the SREC program to new systems upon reaching the 5.1% solar carve-out target. The legislation intends to close the existing SREC program to new projects on or before June 1, 2021. Within 24 months from signing the legislation, the Board of Public Utilities will be required to conduct a study that evaluates how to modify or implement a new solar incentive program. A variety of market stakeholders will be consulted in the process to determine the next best steps forward for the NJ SREC market.

The bill also reduces the solar alternative compliance payment (SACP) beginning with EY2019 and extends the SACP schedule through EY2033. The SACP level drops to $268 in EY2019 and then gradually decreases by $10 each year following.

For more information on the historical progress of the bill, please view our previous blog post on the topic here. SRECTrade will be publishing an updated New Jersey Supply and Demand Analysis to its blog shortly in consideration of this bill.

On January 22nd, President Donald Trump’s administration announced that it approved a four-year tariff on imported crystalline silicon photovoltaic (CSPV) cells and modules. Effective February 7, 2018, the tariff imposes a 30% duty set to decline by 5% each following year. The first 2.5 gigawatts of CSPV products imported in each year will be exempt from the tariff.

The decision followed the U.S. International Trade Commission’s (ITC) unanimous determination that solar cell and module imports are inflicting “serious injury” on domestic manufacturers. Although the Commissioners recommended a variety of tariff rate structures, they agreed upon an increase in duties with an allowance for a limited quantity of imported cells in their proposal to the Trump administration.

The initial Year 1 tariff is expected to increase install costs by 10-15 cents per watt, which Greentech Media estimates could result in approximately a 10 percent reduction in U.S. installed solar capacity. According to the Solar Energy Industries Association (SEIA), of the 260,000 Americans employed in the solar industry, only 2,000 are manufacturing solar cells and modules. SEIA reports that the tariff could cause the loss of approximately 23,000 American jobs in 2018 alone.