The Massachusetts Department of Energy Resources (DOER) recently announced the SREC requirement for the 2012 compliance year. The 2012 compliance requirement is based on a formula that takes into consideration the 2011 compliance obligation, the forecast 2011 total SREC generation, and the actual 2010 SREC generation. A growth rate is then applied to these figures based on a set formula for the MA SREC program. Additional considerations are made for the 2010 Alternative Compliance Payment (ACP) volume, the 2010 banked SREC volume, and the number of 2010 SRECs purchased through Solar Credit Clearinghouse Auction. For a detailed analysis of this formula and the considerations made for setting the 2012 requirement please see this link. 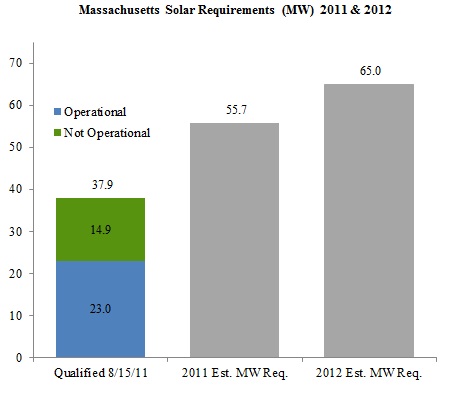 *Note: The 2011 and 2012 estimated megawatts required in the chart above have been adjusted for the impact of the TransCanada settlement.