Estimates show that the 2013 RPS increase equates to approximately 34,150 more SRECs required in 2013 under the new bills. This represents an additional 28.5 MW of solar capacity required, assuming all 2013 RPS requirements are meet using only 2013 vintage SRECs. After 2013, the RPS requirements continue to increase over the old goals, with some of the largest requirement increases estimated to begin in 2016 and onward. 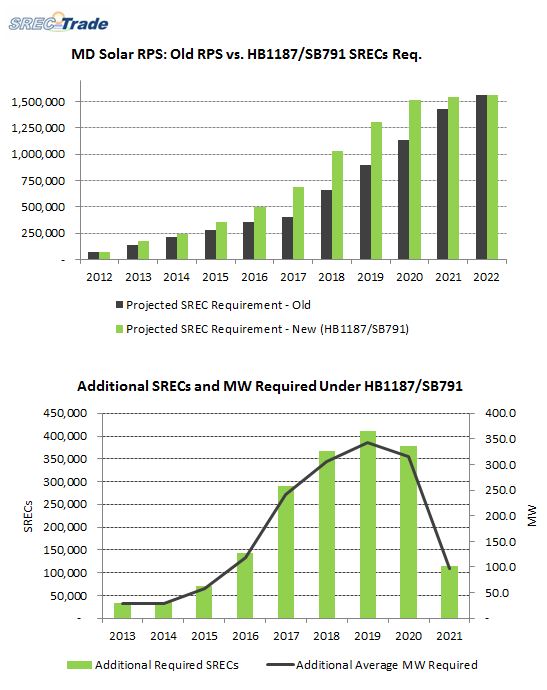 As of the April 2012 SRECTrade Solar Capacity Update, total eligible Maryland solar capacity reached 45.6 MW. Based on projects registered in PJM GATS, over the last twelve months average MW capacity added per month has been 2.6 MW. The 2012 compliance year requires approximately 67,310 SRECs to be retired. As of May 11, 2012, PJM GATS reported the issuance of approximately 10,200 MD2012 SRECs. Under the new requirements, it is estimated that the MD2013 Solar RPS will require 170,800 SRECs, the equivalent of 142.3 MW operational all year long assuming only 2013 vintage SRECs are utilized to meet the state’s SREC targets.