The New Jersey SREC market is oversupplied. The state’s  Solar Renewable Portfolio Standard (RPS) targets a fixed number of megawatt hours (MW-hrs) needed to be purchased by electricity suppliers each compliance period. A MW-hr is the equivalent of one SREC, so in NJ we discuss the SREC market both in terms of total capacity installed in MW and total number of SRECs available each year. Under the current RPS, significantly more solar has been installed than is necessary to meet the state’s RPS goals for the next several years.

The 2012 reporting year (June 1, 2011 – May 31, 2012) requires 442,000 SRECs. Our March 2012 capacity analysis (scroll down to see the NJ numbers) shows that as of the beginning of April, total registered installed capacity was 670.9 MW with 386,500 SRECs issued. More recent data from the New Jersey Office of Clean Energy shows the installed capacity, as of March 31, 2012, at 730.3 MW. Additionally, approximately 455,000 SRECs have been issued in GATS from solar PV generation through March 2012. This figure, demonstrates that as of the last issuance period, there are more than enough SRECs available in the market to meet the 2012 reporting year requirement of 442,000 SRECs. The Generation Attribute Tracking System (GATS) is the organization that all New Jersey PV systems must register with in order to create and transact SRECs.

Another factor is that SREC issuance tends to follow a natural lag due to missing meter reading submissions and delays registering systems with GATS.  Given our experience with this data, it’s reasonable to expect a further bump in SREC numbers through March 2012. Also, April and May 2012 SRECs will be issued at the end of May and June, respectively, and will also add to this year’s total SREC issuance figures.

The additional volume to be issued allows us to project that the market is likely 40% to 50% oversupplied for the 2012 energy year. Lastly, when analyzing the 2013 through 2015 energy year current RPS requirements, the figures show that the market will be oversupplied when taking into consideration eligible excess SRECs rolled forward from prior years and the existing amount of installed capacity as of 3/31/12 currently eligible to produce SRECs. The table below demonstrates this in more detail: 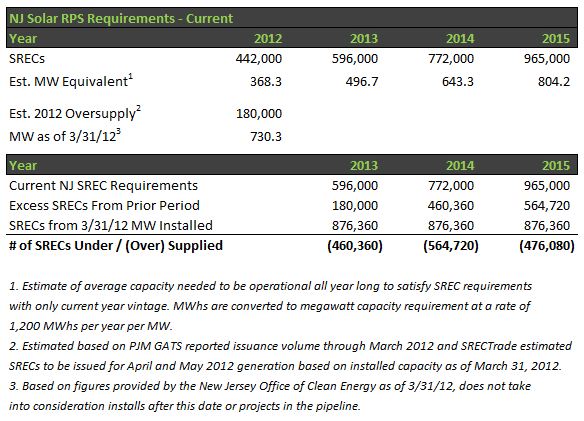 Proposals to stabilize the SREC market

Industry stakeholders are working with the New Jersey legislature to come up with a way to stabilize the NJ SREC market. A NJBiz.com article dated May 3rd, mentions a possible bill proposal by Sen. Bob Smith (D-Piscataway), Chairman of the Senate Environment Committee, that would accelerate New Jersey’s solar goals while reducing how much buyers would need to pay for their SRECs if they don’t have enough SRECs in their portfolios at the end of each energy year.

To date, no bill has been made publicly available. Based on the information provided on the NJ State Legislature website, it appears the bill will be slated under the number S1925. The current description listed includes the following, “Revises certain solar renewable energy programs and requirements; provides for aggregating net metering of Class I renewable energy production on certain contiguous and non-contiguous properties owned by local government units and school districts.”

Until then, we must speculate on what the final contents of the bill will be.  An additional consideration is that even if a bill is passed by the NJ legislature, the bill will likely not go into effect until the 2014 energy year which starts in June 2013.