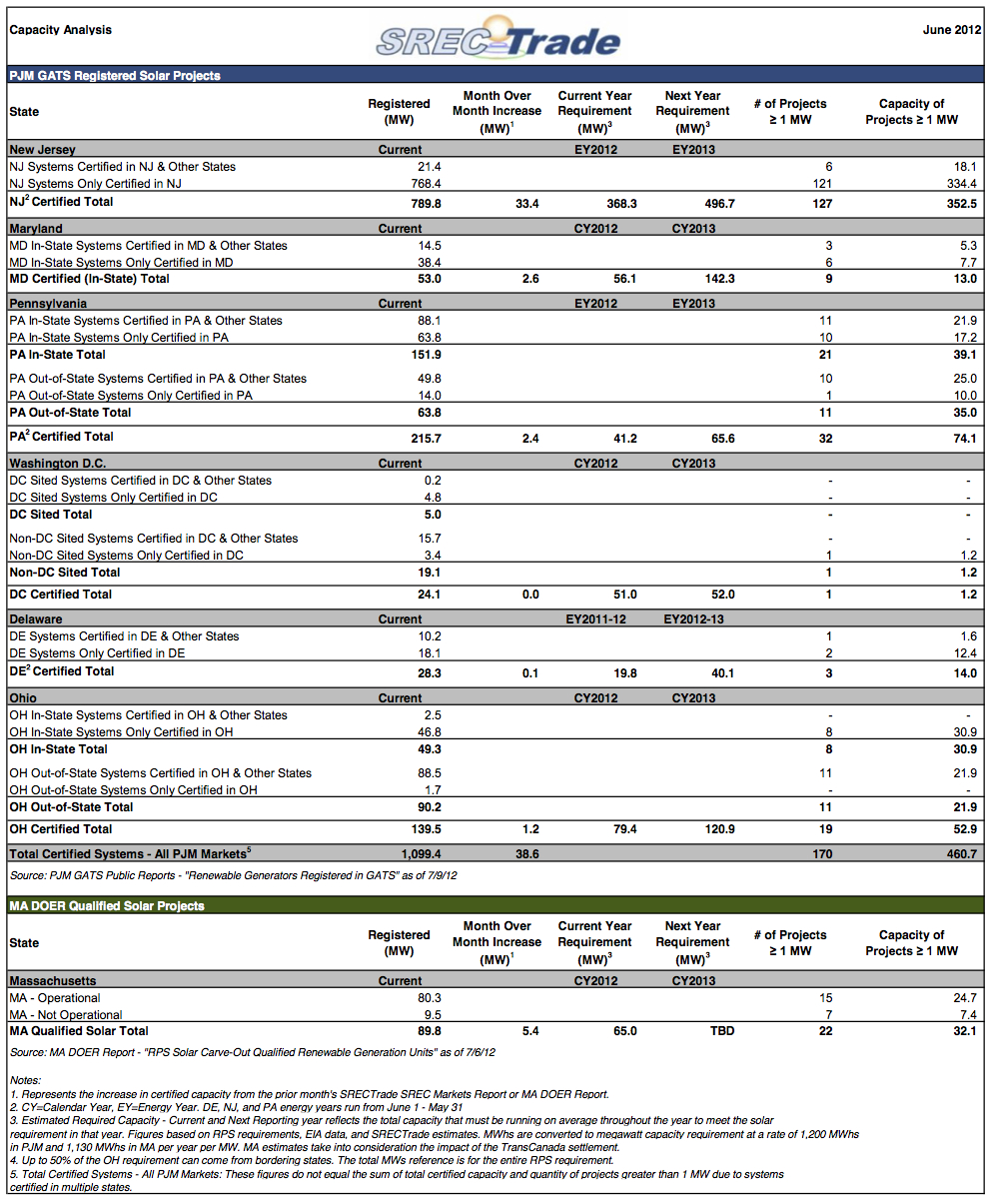 As of this writing, there were 26,797 solar PV and 351 solar thermal systems registered and eligible to create SRECs in the PJM Generation Attribute Tracking System (GATS). Of these eligible systems, 170 (0.63%) have a nameplate capacity of 1 megawatt or greater, of which 17 systems are greater than 5 MW. The largest system, the PSE&G utility pole mount project located in New Jersey, is 25.1 MW, and the second largest, located in New Jersey is 12.5 MW. The third largest system, at 12 MW, is located in Ohio.

Delaware: The reporting year 2011-12 (6/1/11 – 5/31/12) requirement for DE equates to approximately 23,700 SRECs being retired. If all retired SRECs were of DE2011-12 vintage, approximately 19.8 MW would need to be operational all year long. As of July 9, 2012, 28.3 MW of solar capacity was registered and eligible to create DE SRECs in PJM GATS. 11.2 MW of the 28.3 MW currently eligible is from the Dover Sun Park project developed by LS Power. In the 2011-12 compliance year, Delmarva Power has contracted to purchase 9,846 SRECs from the project, of which 7,000 are being held by the Sustainable Energy Utility (SEU) until 2015-16*. Additionally, in April 2012 the DE SREC Pilot Program closed its first solicitation. As of July 10, 2012, PJM GATS reported the issuance of approximately 31,700 DE2011-12 vintage SRECs. Additional SRECs from prior eligible periods may also impact the market should there be a demand for these older vintage SRECs. 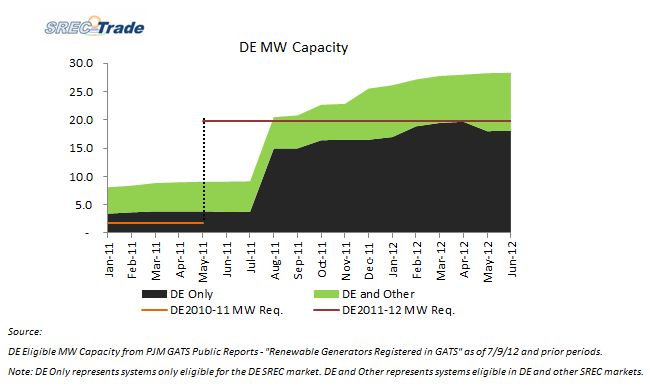 Maryland: As of July 9, 2012, 53.0 MW of MD sited solar capacity was registered to create MD eligible SRECs. 2012 Solar RPS requirements are estimated at 56.1 MW or approximately 67,310 SRECs. MD Governor, Martin O’Malley recently signed into law legislation to pull forward the RPS requirements. The state has seen an average over the last twelve months of 2.7 MW added per month in PJM GATS. While this figure is made up of predominately residential and commercial projects, on July 7, 2012, First Solar announced the groundbreaking of its development of a 20 MW facility in Hagerstown, MD. Additionally, Constellation Energy is in the process of constructing a 17.4 MW facility at Mount St. Mary’s University. As of July 10, 2012, PJM GATS reported the issuance of approximately 22,600 MD2012 SRECs. Lastly, there are MD sited SRECs available from prior eligible periods, which could be utilized for compliance needs in 2012. 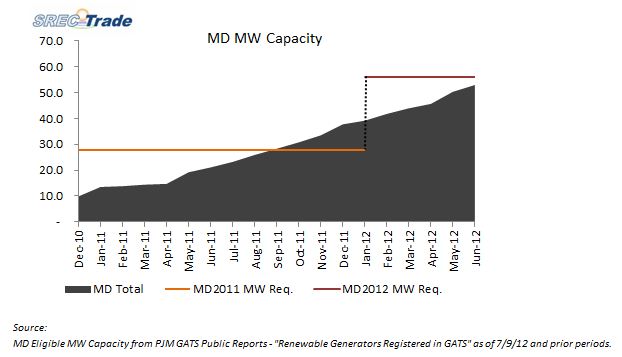 New Jersey: The New Jersey 2012 reporting year requires 442,000 SRECs to be retired. This equates to approximately 368 MW of capacity being operational all year long, assuming all requirements were met with current vintage year SRECs. As of July 9, 2012, 789.8 MW of solar capacity was registered and eligible to create NJ SRECs in PJM GATS. While this figure represents all projects registered in GATS, there are recently installed projects awaiting issuance of a New Jersey state certification number. This delay results in a portion of installed projects not yet represented in the 789.8 MW figure. As of April 30, 2012 the NJ Office of Clean Energy (NJ OCE) reported that 770.0 MW of solar had been installed in NJ. Additionally, estimates through June 2012 show 831.6 MW of total installed capacity. On June 25 the NJ House and Senate passed legislation to increase the state’s Solar RPS. For details see the following: A Break in the Clouds? – NJ Legislature Passes S1925/A2966. As of July 10, 2012, PJM GATS reported the issuance of approximately 671,500 NJ2012 SRECs. This figure surpasses the current 2012 compliance year requirement of 442,000 SRECs by approximately 230,000 SRECs. 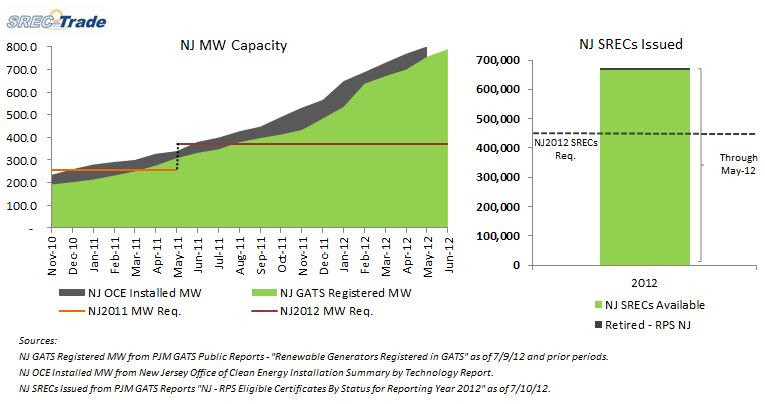 Ohio: Ohio’s 2012 RPS solar target requires approximately 95,300 SRECs to be retired by the end of the compliance period. At least 50% of the SREC requirement must come from systems sited in the state. As of July 9, 2012, 49.3 MW of in-state capacity and 90.2 MW of out-of-state capacity were eligible to generate OH SRECs. As of July 10, 2012, GATS issued approximately 24,200 in-state and 44,200 out-of-state OH2012 eligible SRECs. Additional SRECs from prior years are also eligible for the current compliance period, which may impact the current year’s requirements. 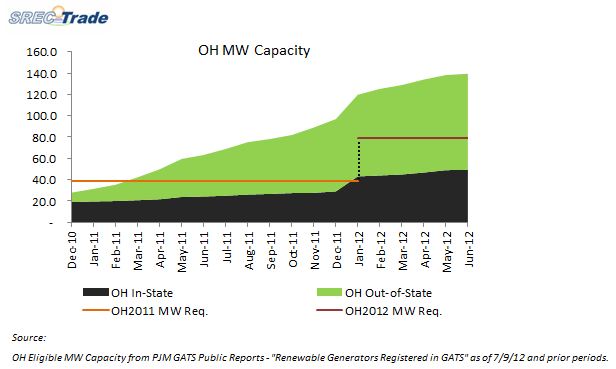 Pennsylvania: The reporting year 2012 requirement for PA equates to retiring approximately 49,450 eligible SRECs. If all compliance obligations were met using 2012 vintage SRECs, approximately 41.2 MW would need to be operational all year long. As of July 9, 2012, 215.7 MW of solar capacity was registered and eligible to create PA compliant SRECs. As of July 10, 2012, PJM GATS reported the issuance of approximately 197,300 PA2012 SRECs. Given the oversupply during previous reporting years, there are also SRECs from the 2010 and 2011 reporting years eligible for the PA2012 compliance period. 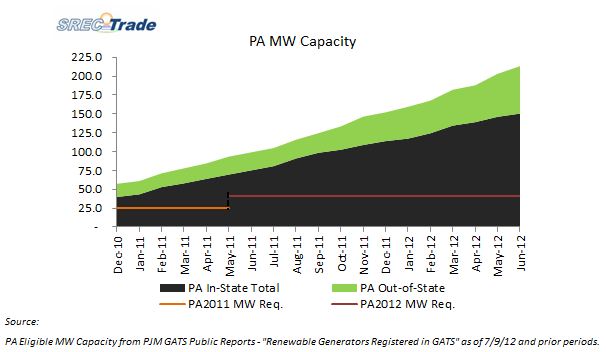 Washington, DC: DC’s 2012 RPS amended solar target requires approximately 61,180 SRECs to be retired by the end of the compliance period. The figures displayed above demonstrate the capacity of systems eligible to create DC SRECs moving forward. These SREC and capacity figures do not take into consideration the amount of electricity delivered into the district that may be exempt from complying with the Distributed Generation Amendment Act increases, considering some electricity contracts may have been signed prior to the amendment’s implementation. As of July 9, 2012, 24.1 MW of capacity was eligible to generate DC SRECs. Additionally, as of July 10, 2012, GATS reported the issuance of approximately 11,400 DC2012 eligible SRECs. SRECs from prior years are also eligible for the current compliance period, which may impact the current year’s requirements. 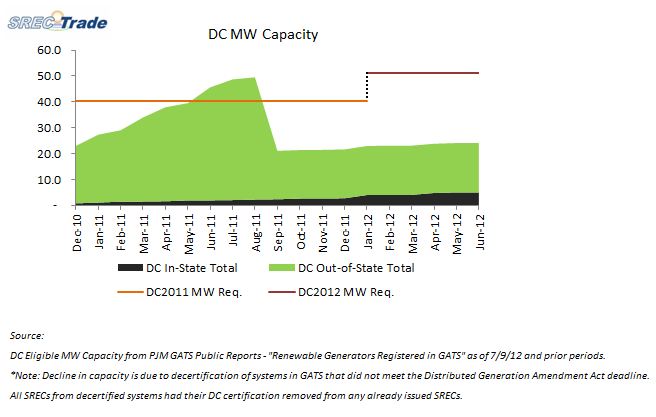 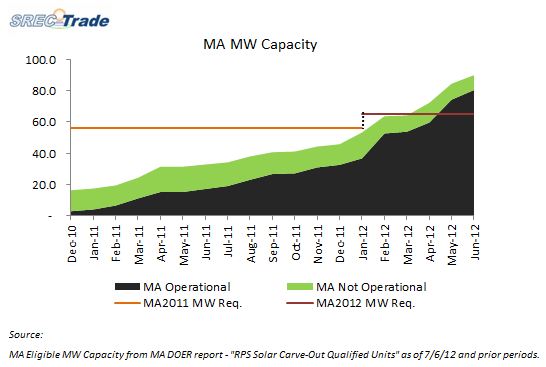