On May 17th and 18th, SRECTrade attended the Illinois Power Agency’s Renewable Resources Workshops. These workshops centered around the state’s new RPS and its components, including the Adjustable Block Program, Community Solar incentives, and the Illinois Solar For All Programs.

The new RPS moves to a single compliance regime rather than having separate mechanisms for customers serviced by the alternative retail electricity suppliers (ARES). Under the old RPS, this retail choice lead to budget and target uncertainties. The goal of the new RPS will still be 25% renewables by 2025, but this target will now apply to all retail sales. The Future Energy Jobs Act, Public Act 099-0906, was signed into law on December 6, 2016 and can be read here.

The new law will take effect on June 1, 2017. Please see below for a draft timeline for the implementation of the RPS programs, as provided by the IPA in its Overview presentation: 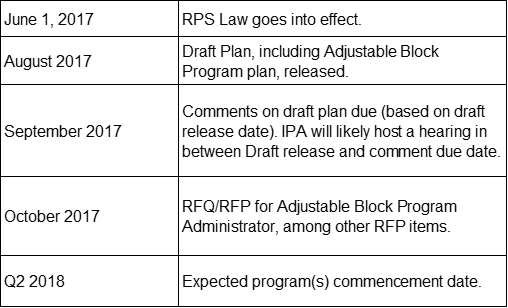 Under the new RPS, Illinois is moving away from structured procurements for non-utility scale solar. Projects up to and including 2 MW in size will instead be eligible for participation in the new RPS’ Adjustable Block Program, or ABP, which will provide for 15-year REC contracts.

Key components of the ABP are:

The goal of the ABP is to ensure that solar projects are developed in diverse locations and that they are not overly concentrated. The IPA has yet to determine the number, size, categories, and prices of blocks as well as the application, contracting and delivery process. These issues will be resolved during the implementation process.

Community Solar will operate as a subset of the ABP with similar features and the same goal. Under community solar, an electric generating facility credits the value of electricity generated to the subscribers of the facility. A subscriber has a subscription of no less than 200 watts to a community renewable generation project and may total no more than 40% of the nameplate capacity of an individual project. At a high level, the provision for Community Solar Projects will mirror those for larger DG systems, but may differ in project development and application requirements.

Illinois Solar for All Programs

The goal of the Illinois Solar for All Programs is to bring solar PV to low-income communities in Illinois. The programs are distinct but will share aspects with the Adjustable Block Program for DG and Community Solar. The four programs are as followed: