Archive for the ‘Maryland’ Category

This adjustment to Maryland’s RPS should bring a more gradual increase to the solar carve-out requirement. Our enclosed analysis projects the 2021 market and forward years to be undersupplied – we expect the degree of undersupply to increase in years 2022 and 2023 and show a moderate decrease in year 2024. The forecasted degree of undersupply seen in years 2022-2024 has seen a substantial decrease from our previous analysis due to the recent reductions in RPS. While we project that the new changes to Maryland’s RPS will decrease the degree of undersupply seen in forward years, build rates still must show a substantial increase in order to keep up with the new RPS schedule.

The new law also removes black liquor, a paper mill byproduct, from the list of eligible Tier I REC resources.

SRECTrade plans to publish an analysis on the impacts that this law could have on Maryland’s SREC market in the coming weeks.

Many SREC markets have been subjected to unprecedented impacts this year from the worst international pandemic in recent history, COVID-19, and Maryland is no exception. Despite some companies having to re-imagine their solar sales and installation processes, the Maryland Clean Energy Jobs Act (CEJA) continues to have a profound impact on the state’s SREC market. CEJA increased Maryland’s Renewable Portfolio Standard (RPS) to 50% by 2030 with a solar carve-out of 14.5% by 2028, more than doubling the 2020 solar requirement in the process. On the other hand, CEJA established a declining solar alternative compliance payment (SACP) schedule set at $100.00 this year but decreasing by $20.00 in 2021 and 2022 and by lower magnitudes thereafter.

The estimated 2020 electric load is also down from 2019 totals due to decreases in the commercial and industrial sectors, while residential electricity usage saw a slight increase. Our enclosed analysis projects the 2020 market to be oversupplied while forward years will see an increasingly undersupplied market – an indication that build rates must show a significant increase in order to keep up with the current RPS. The final 2020 MD SREC production, final 2020 MD load figures, and actual grandfathered load could impact the degree of oversupply in 2020 and undersupply in forward years.

On May 22nd, 2019, Maryland Governor Larry Hogan announced his decision to let the Maryland Clean Energy Jobs Act pass without his signature. The Act increases Maryland’s Renewable Portfolio Standard to an aggressive 50% by 2030. Additionally, the solar carve out target increased to 14.5% by 2028 and the Solar Alternative Compliance Penalty (SACP) was adjusted to $100.00 in 2019 and 2020, and decreasing each year thereafter. In response to these anticipated, and now enacted, legislative changes, the SREC market in Maryland has experienced a significant upward swing from $11.00 to $65.00 since the beginning of 2019.

Electricity load that was signed under contract prior to the bill’s effective date of October 1, 2019, is not subject to the new compliance obligations. Our calculations assume that approximately 80% of the 2019 electricity load is under prior contract and therefore exempt, with 25% of that exempt load rolling into the new compliance obligations each year moving forward.

Solar build rates have been trending downwards over the last six months in comparison to the last twelve months. Assuming no drastic decrease in build rate, we expect the market to be oversupplied in 2019, and undersupplied each year thereafter. The enclosed analysis further details the implications of the Maryland Clean Energy Jobs Act and the potential responses from the MD SREC market.

On Friday, May 22nd, Governor Larry Hogan announced that he would let the Maryland Clean Energy Jobs Act (SB-516) pass without his signature. The Governor’s decision to let the bill pass puts Maryland at the forefront of a growing list of states with aggressive renewable targets. This legislation requires 50% of Maryland’s energy to come from renewable sources and 14.5% from in-state solar, by 2030. In addition to the 2030 targets, the bill mandates that the state conduct research on strategies to reach 100% renewable energy sources by 2040, among other initiatives.

The Governor supplemented his decision to let the bill pass unsigned with a letter to Maryland Senate President, Thomas V. Miller, expressing his concerns with the bill and affirming his promise to continue pushing for a cleaner portfolio of energy resources in Maryland. SRECTrade will conduct further analysis on the impacts of this legislation and publish a comprehensive SREC market analysis in the coming weeks.

On April 8th, the Clean Energy Jobs Act (CEJA) passed the Maryland House of Delegates, 95-40, and Senate, 31-15, respectively. Most notably, the Bill increases the state’s renewable energy mandate from 25% to 50% by 2030. The in-state solar carve-out follows suit, raising the 2019 solar carve-out to 5.5%, increasing to 14.5% by 2028. The solar carve-out and Solar Alternative Compliance Penalty (SACP) schedule is amended as follows:

The bill now heads to Governor Larry Hogan’s desk, where he has the option to either sign, veto, or let the bill go into law without his signature. While uncertainty remains on Governor Hogan’s view on the legislation, some believe his recently shared perspective demonstrates positive support.

SRECTrade will continue to monitor the situation and provide further analysis if and when the Bill goes into law.

Last week, on Tuesday, March 19, 2019, the Maryland Senate passed the Clean Energy Jobs Act (CEJA) 33-13. Senate Bill 516 most notably increases the Maryland Renewable Portfolio Standard (RPS) to 50% renewable energy by 2030. The bill also substantially increases the state’s Solar REC program bumping the 2019 solar requirement to 5.5% and increasing until it reaches 14.5% in 2028 and onward.

For the legislation to progress, the Maryland House Economics Matters Committee would need to bring it forward and be voted on favorably on the floor of the House. The bill would then ultimately be sent onward to Governor Larry Hogan’s desk. Governor Hogan will then need to sign the bill or let it pass without his signature to put the bill into law. While uncertainty remains on Governor Hogan’s view on the legislation, some believe his recently shared perspective demonstrates positive support.

Since the Senate voted in favor of the bill, the House hasn’t taken action on the matter yet. On Monday, March 25, U.S. Senator Chris Van Hollen (D-Md.) put his support behind the bill. Senator Van Hollen sent a letter to House Economic Matters Chair Dereck Davis explaining why time is of the essence. Specifically Van Hollen noted that delaying the legislation until next year could result in the loss of nearly $250 million in federal investment tax credit (ITC) dollars. Additionally, further delay could continue to hurt the solar jobs market in the state. Maryland lost 800 solar industry jobs in 2018, ranking it 47th in solar growth in the U.S.

As of now, the bill awaits action in the House. Not much time remains in the current general session, which is scheduled to adjourn on Monday, April 8. SRECTrade will continue to monitor these proceedings closely and update our partners and clients with any new information.

Building on Momentum in Maryland

With the 2019 Maryland legislative session fast approaching, solar advocates have begun to rally support for the Maryland Clean Energy Jobs Act (“MCEJA”) behind a heavily Democratic Maryland General Assembly. According to State Senator Brian Feldman and House of Delegates Representative Cheryl Glenn, a veto-proof majority of 30 Senators as well as 82 House of Delegates Representatives have already pledged support for the MCEJA, renewing a sense of optimism within the state following the rejection of a similar proposal in the 2018 legislative session.

Among other renewable energy goals and initiatives, the MCEJA calls for a doubling of the state’s Renewable Portfolio Standard (“RPS”) to 50% by 2030, which would put Maryland amongst a growing list of states, including California, Washington D.C., New Jersey, and New York, adopting aggressive and robust clean energy mandates. Proponents of the MCEJA assert that the Act would create over 5,000 new jobs, doubling the previous amount, and stimulate investor confidence within the industry.

Uncertainty still surrounds Maryland Governor Larry Hogan’s position on the MCEJA. While Hogan previously vetoed a more modest proposal in 2016, his co-authorship of a piece in the Washington Post, calling upon states to “put aside partisan interest and get to work [on climate change]”, has instilled confidence in environmental advocates of his potential support. Hogan would be able to veto, sign, or let the Act pass without his signature. SRECTrade will continue to monitor developments in Maryland and update our partners and clients accordingly.

Posted in Maryland, SREC Markets, State RPS | Comments Off on Building on Momentum in Maryland

The bill’s lead sponsor, House Majority Leader C. William Frick (Dem), announced the night of the 14th that he was withdrawing the bill before a full vote of the Economic Matters Committee. The 100% Clean Renewable Energy Equity Act of 2018 (HB 878), a bill designed to raise the state’s RPS to 100 percent by 2035, was also withdrawn on the 14th.

The Clean Energy Jobs Act of 2018 was supported by more than 660 faith groups, environmental organizations, unions, and civic leaders. Proponents of the bill are looking to pass the bill in 2019 after making it an important election issue this year.

With the close of the Maryland 2017 compliance year approaching, we thought it would be relevant to provide an update on where the current market stands, including recent happenings that could impact the future Renewable Portfolio Standard (RPS) requirements. Click here for our full presentation.

This year started off slightly more positive as the market moved up off its early Q4 2017 lows of about $5.00-6.00/SREC. Recent spot transactions have been ranging between $7.00-7.50/SREC. Additionally, the MD2018 and MD2019 forward markets have trended up into the $8.50-$10.50/SREC range depending on vintage and transaction size. It is likely that a combination of the 2017 compliance year coming to a close as well as standard offer service electricity load auctions taking place in late January had a positive price impact through increasing buy side demand.

Under the current RPS requirements, the MD SREC market is fundamentally oversupplied. Solar build rates remained strong through the end of 2017 and the 100 megawatt (MW) Great Bay project is now registered in PJM GATS. Excluding the Great Bay project, however, the market experienced a 15.7% decline in average MW build per month in the last 6 months versus the last 12 months (through November). Even though the rates per month are declining, the market saw a push of project registrations heading in to the close of 2017, which is typically normal at year end (i.e. excluding Great Bay, 33.9 MW were registered in GATS through November 2017 vs. 26.7 MW through August 2017). 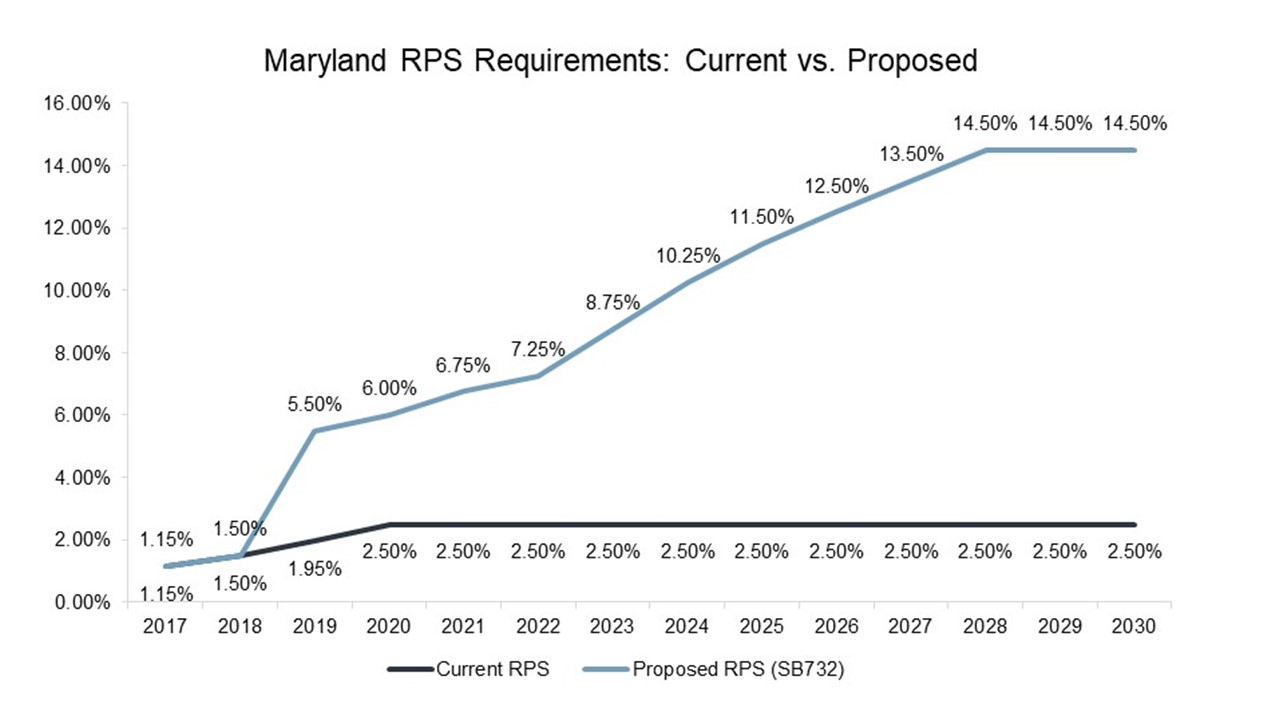 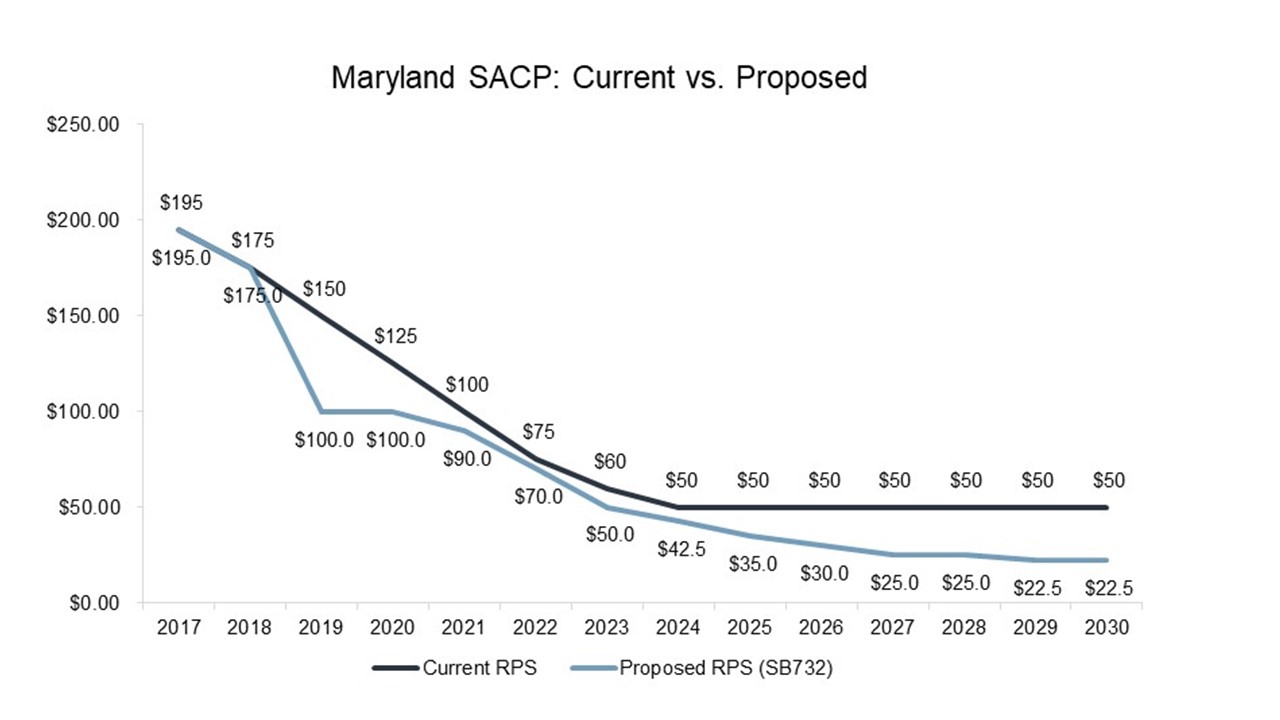 The bill had its first reading in the Senate Finance Committee in early February. It is scheduled to be heard in the house (HB1453) on March 5th and then in the Senate on March 6th. As demonstrated in the Maryland SREC Update presentation above, the increase in the RPS % under SB732 would allow for Maryland’s solar market to continue to build at rates in excess of current last 12 month averages (i.e. 20.3 MW/month). This would allow the market to develop a variety of project types including larger, utility scale projects that the state has seen over the past few years. While the step up to a 5.5% solar requirement in 2019 is substantial, our presentation does not take into consideration the impact of exempt electric load that would only be eligible under the old RPS schedule given already signed electricity supply agreements. Exempt load would reduce estimated demand in the earlier years of the RPS increase under SB732, but nonetheless the RPS increase would have a substantial effect on increasing the demand for SRECs and solar supply in the state of Maryland.

SRECTrade will continue to track the status of this legislation. In the meantime, please feel free to contact us with any questions.