In October of 2010, American Electric Power (AEP) Ohio announced plans to partner with Turning Point Solar to build a 50 MW solar project in southeastern Ohio.  The first panels are expected to go online in late 2012, and the final panels should be operational in late 2014.  A project of this size is expected to cost approximately 200 million dollars, some of which has already been secured.  AEP Ohio plans to invest 20 million in the project, and Agile Energy, the developer for the project, has also secured $37 million from Good Energies Capital, up from the previous commitment of $13 million.  Low-interest loans and tax credits are coming from the Rural Utilities Service, and the state of Ohio is providing $7 million in assistance.  This project is not falling under the umbrella of the DOE loan guarantee program, and thus will not be subject to any potential federal budget cuts.

According to projected construction schedules, the first 20 MW will begin construction in the summer of 2012 and online in late 2012, with another 15 MW coming online in late 2013, and the final 15 MW in late 2014.  This will significantly increase the number of SRECs available in the Ohio market, and will assist in providing the necessary SRECs for AEP to reach its solar RPS requirements.  Currently, AEP obtains a significant number of required SRECs from the 12 MW Wyandot Solar Facility in Upper Sandusky, Ohio.  With both facilities scheduled to be online for the entire 2013 reporting year, this will make up approximately 24% of the total Ohio SREC requirement and approximately 48% of the In-State Ohio SREC requirement.  It remains to be seen as to whether the constructoin of such a large generating facility in addition to other in state and out of state OH project development will drive down the prices of Ohio SRECs, but the construction of large solar farms moves the market away from the decentralized, local power generation that solar is capable of providing.

The chart below shows the projected SREC requirements for Ohio through 2015.  As the Turning Point Solar Facility capacity increases, SRECs controlled by AEP will comprise approximately 25% of the solar RPS requirement in each of 2013-2016 compliance years.  Because these are in-state SRECs, approximately half of the in-state solar requirement will be controlled by AEP.  How this will play out in terms of SREC prices is yet to be seen, but in other state markets organizations have stepped in to buy the SRECs from large producers to avoid SREC oversupply.  However, there has been no indication that this may happen in Ohio. 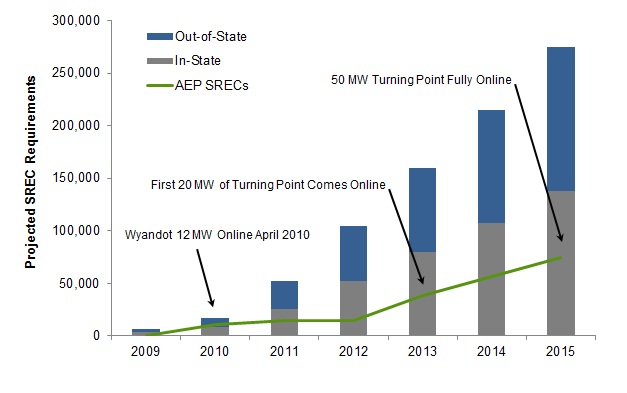