On August 2, 2011, the Massachusetts Department of Energy Resources (DOER) proposed an amendment to the Solar Alternative Compliance Payment (SACP) schedule for the MA SREC program. Feedback from market participants including project developers, financing parties, and retail electricity suppliers indicated the current SACP structure creates uncertainty around future SREC valuation. Under the existing structure, the DOER has the ability to reduce the SACP on a yearly basis by up to 10% of the current value. The amended schedule seeks to provide more certainty for expected future prices while assisting project financing and negotiations for long-term SREC contracts.

The proposal establishes a 10-year schedule for the SACP that would maintain the current rate of $550/SREC through compliance year 2013, then decrease 5% each following year. The proposal also requires the schedule to be updated on a yearly basis to include a price for the 10th year of the schedule. For example, the 2022 price will be added to the schedule no later than January 31, 2012. The table below demonstrates the proposed schedule. 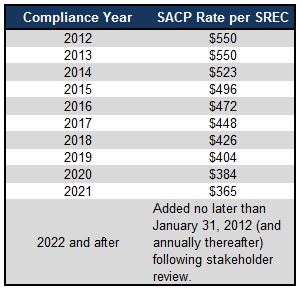 Prior to implementation, the proposed schedule is to go through a comment process. The comment period is currently open through August 15, 2011. Once all comments are collected, the DOER will review and begin the necessary process to amend the existing Solar Carve-Out provisions.