The MA Department of Energy Resources (DOER) recently published an updated qualified solar projects list as of September 23, 2011. The state currently has a total of 982 solar projects, 957 operational and 25 not operational, eligible for the SREC program. 11 of the 982 projects are greater than 1 MW, 3 of which are currently operational. The largest project, located in Sheffield, MA and approximately 2.0 MW, is not yet operational. The second largest project is 1.8 MW, located in Dartmouth, MA, and has been operational since March 2011. The table below demonstrates the change in capacity and # of projects from the last update on August 15, 2011.

The chart below demonstrates the qualified capacity as of 9/23/11 compared to the estimated MW requirements needed to be online and operational during the entire 2011 and 2012 compliance years to meet the state’s solar obligations. 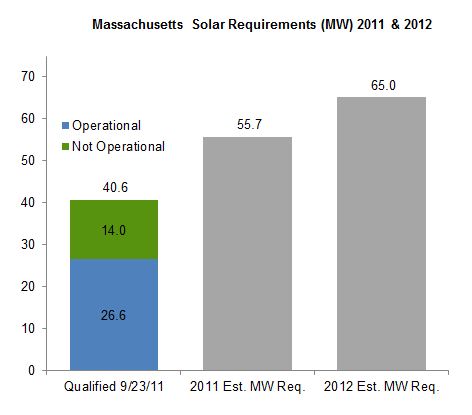 Note: The 2011 and 2012 estimated megawatts required in the chart above have been adjusted for the impact of the TransCanada settlement.

* These figures represent the MWhs reported to PTS on a monthly basis. The DOER notes that the data from PTS is not finalized and the actual number of SRECs minted by NEPOOL GIS may differ.

One Response to “MA Capacity Update”