The New Jersey Office of Clean Energy (NJ OCE) recently released installed solar capacity figures as of July 31, 2011. After the first two months into Energy Year (EY) 2012, the state has averaged a rate just over 30 MW/month, bringing the total installed capacity to nearly 400 MW, up from 339.6 MW at the end of EY2011. These figures exceed the estimated average capacity required to meet the state’s 2012 target of approximately 370 MW.

The rapid growth in capacity corresponds with a sharp decline in prices for 2012 spot trading, with the September auction clearing at $166.79. The estimated average installed capacity needed to meet the EY2013 requirements is 500 MW. To reach this target by the beginning of EY2013, the state would only have to install an additional 100 MW, or an average of 10 MW/month for the remainder of EY2012. 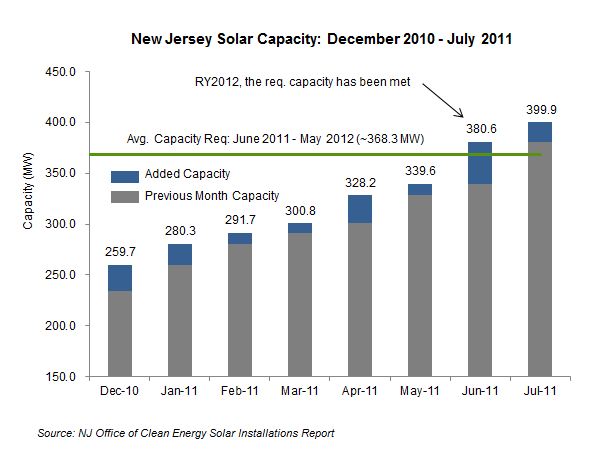