Summer is here, which means our interns have joined us, making it one of the more playful times of the year. Here at SRECTrade, we are regularly amused by the creative ways people have come to pronounce SRECs and consequently, the name of our website. We’ve heard it all from “coupons” to SWREKs to ES-AR-EE-SEEs to SEX-WREKs (we kid you not) to SWREKSYs, and of course, our favorite: SHREKs. The latter was first coined by a few of our customers (independently) in 2009. Since then, the green ogre has become our (unofficial) mascot. Most recently, we were amused to see someone claim that this was ACTUALLY how it was pronounced! We’d love to toss the guy up on our website, but we don’t think DreamWorks would appreciate that, so we’ve settled for a presence in our office… 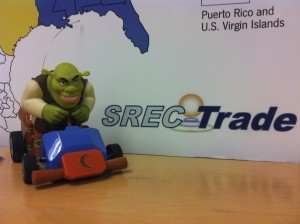 To be fair… we don’t necessarily enjoy having to explain it either. Try walking around a conference showroom and telling people that you work at SRECTrade. It doesn’t exactly roll off the tongue. Then try getting an investor excited about it. Burton Malkiel famously highlights how company names can (foolishly) affect investor interests in his classic book, A Random Walk Down Wall Street. The “tronics” boom of the early 60s, the biotech boom of the 80s and the dot-com boom of the late 90s all saw companies, that had nothing to do with electronics, biotech or dot-coms, change their names in order to reap the rewards of the higher price-to-earning multiples that their quote-unquote peers were achieving. Don’t be surprised if someday we become something more like SRECBook or InstaSREC or SRECoupon based on what is exciting at the time!

Coming up with a name can either be an art or a science. In our case… it seems the latter prevailed. Back in 2007, InClime, LLC, short for “Innovative Climate Solutions” was set up at Stanford to explore opportunities in the renewable energy space. In late 2007 as the idea that would become SRECTrade was being formed, the platform was named Renewenex, short for “Renewable Energy Exchange.” The founding team would soon figure out that the combination of “e”s and “n”s was a recipe for misspelling and general confusion. Just typing the word Renewenex is next to impossible (try it)! When RECTrade.com was taken, the founders settled on the SRECTrade.com that we’ve all come to know. It may not be the prettiest name in the book, but it doesn’t take long for solar folks to understand what we do and we can guarantee we’ll show up first in search results despite the best efforts of our competitors and would-be copycats!

Finally, for all of you “solar” or “sun” companies out there, fear not… someday, your time will come and Wall Street will fall all over itself for the next hot “solar” company. The solar boom hasn’t happened yet. We’ve fumbled out of the gates thanks to companies like Solyndra, but, whether it’s 5, 25 or 50 years from now, the tech and finance geniuses in this industry will someday figure out how to make solar pervasive across the world. When that happens… we’ll gladly change the website to SolarRECTrade. 🙂

Until that day comes, in case you were wondering… we simply pronounce it “ES-WREK-TRADE,” but feel free to call us SHREKTrade whenever you want!