The Massachusetts 2012 compliance year began on January 1, 2012. SREC issuance for Q1 2012 generation (January – March 2012) will take place on July 15, 2012. Solar REC under supply in previous compliance periods led to SRECs pricing just below the Solar Alternative Compliance Payment (SACP). Pricing right below the SACP is common in the early stages of a market with a Solar Carve-Out requirement in a state’s Renewable Portfolio Standard (RPS). As the market matures and attracts more participants, typically due to high SREC prices, the market sees an overbuild of solar which quickly turns to an oversupplied market and pricing declines.

As the Massachusetts 2012 compliance year moves on, the prospect of oversupply has become apparent. In March 2012 we provided an update on MA solar supply, taking a closer look at three different potential install scenarios for the 2012 period. This update takes a similar approach, analyzing how various project size categories are impacting the market and what the forecast scenarios mean for 2012 supply. Additionally, we will look at how these scenarios could impact the 2013 SREC requirements.

The chart below demonstrates the beginning balances of MW capacity (in gray), the added MW capacity (in green), and the total capacity (above each bar) on a monthly basis going back to January 2011. The balances below were derived from the Department of Energy Resources’ (DOER) RPS Solar Carve-Out Qualified Units report as of June 7, 2012. Monthly capacity balances are based on the Commercial Operation Date noted in the report. 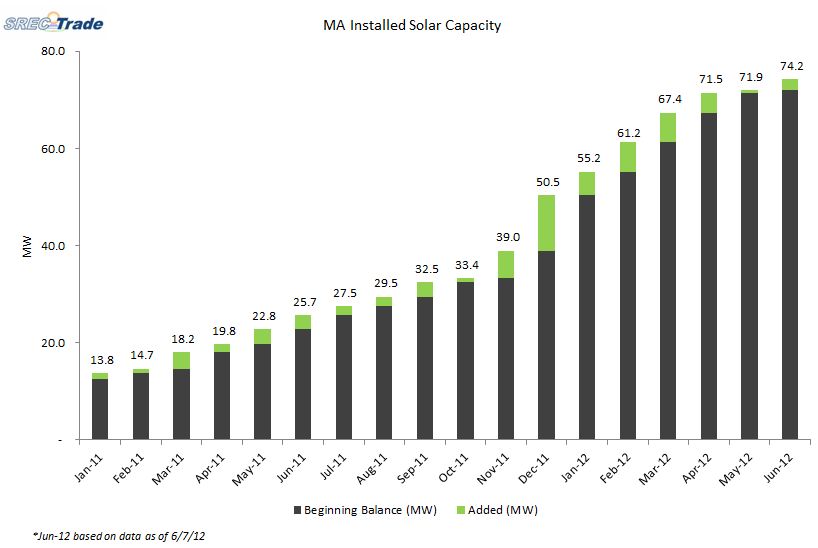 Converting 2012’s SREC requirement to an average balance of online MW capacity, we estimate approximately 65.0 MW needed to be operational all year long. Note, this takes into consideration the exempt load resulting from the TransCanada settlement. Taking the beginning balance of capacity as of January 1, 2012 and the ending balance of capacity as of May 31, 2012, the average capacity online for the 2012 year to date is 61.2 MW. During this five month period, 21.5 MW were installed, compared to 10.3 MW, a growth rate of 109.0%, for the same period in 2011. Additionally, the DOER noted the MWh reported to the Production Tracking System (PTS) from January 2012 to May 2012.

As shown above, the MWhs reported through May 2012 are approximately 40% of this year’s SREC obligation. Historically, the MWh reported to the PTS have typically been understated as compared to the actual number of SRECs issued in NEPOOL GIS. With less than half way through the year, and some of the most productive months ahead of us, it appears that the generation reported and the expected remaining generation is in line to exceed this year’s obligation.

The last time we evaluated MA projects by size category, projects less than 500 kW saw substantial growth. In addition to continued growth in these categories, MA solar has also seen growth in projects greater than 500 kW. In the early stages of the MA SREC market, projects greater than 500 kW quickly have an impact on SREC oversupply. The table below shows operational projects based on their DOER reported commercial  operation date as of June 30, 2011 and June 1, 2012. 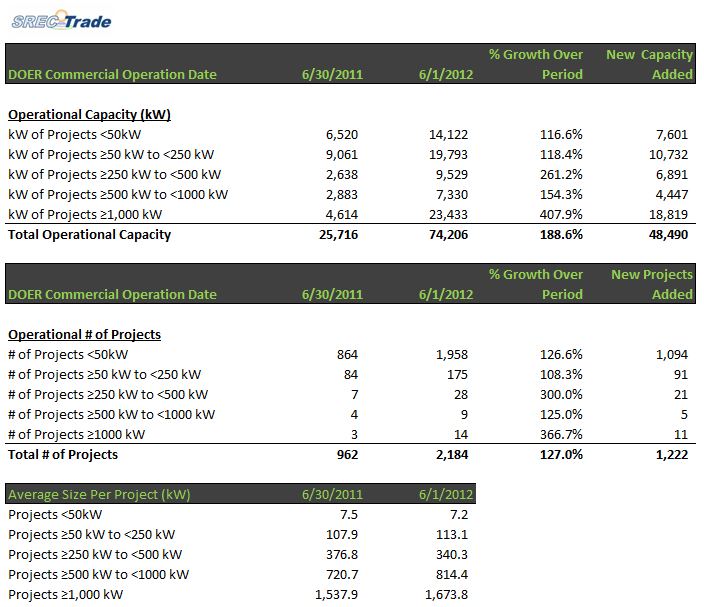 Over the Last Twelve Months (LTM),  June 2011 – May 2012, average operational capacity installed has been 4.1 MW per month. The cases presented below apply three scenarios for the remaining months in the compliance period (June – December 2012):

1) Half of the LTM average capacity is added per month: This equals approximately 2.0 MW/month for the remaining months left in 2012. Note, the DOER’s June 7, 2012 data showed 2.3 MW installed in June alone, thus we can be assured that at least this capacity and likely more will come online in June.

2) LTM average capacity remains the same per month: This equals approximately 4.1 MW/month for the remaining months left in 2012.

3) Two times the LTM average capacity is added per month: This equals approximately 8.2 MW/month for the remaining months left in 2012. 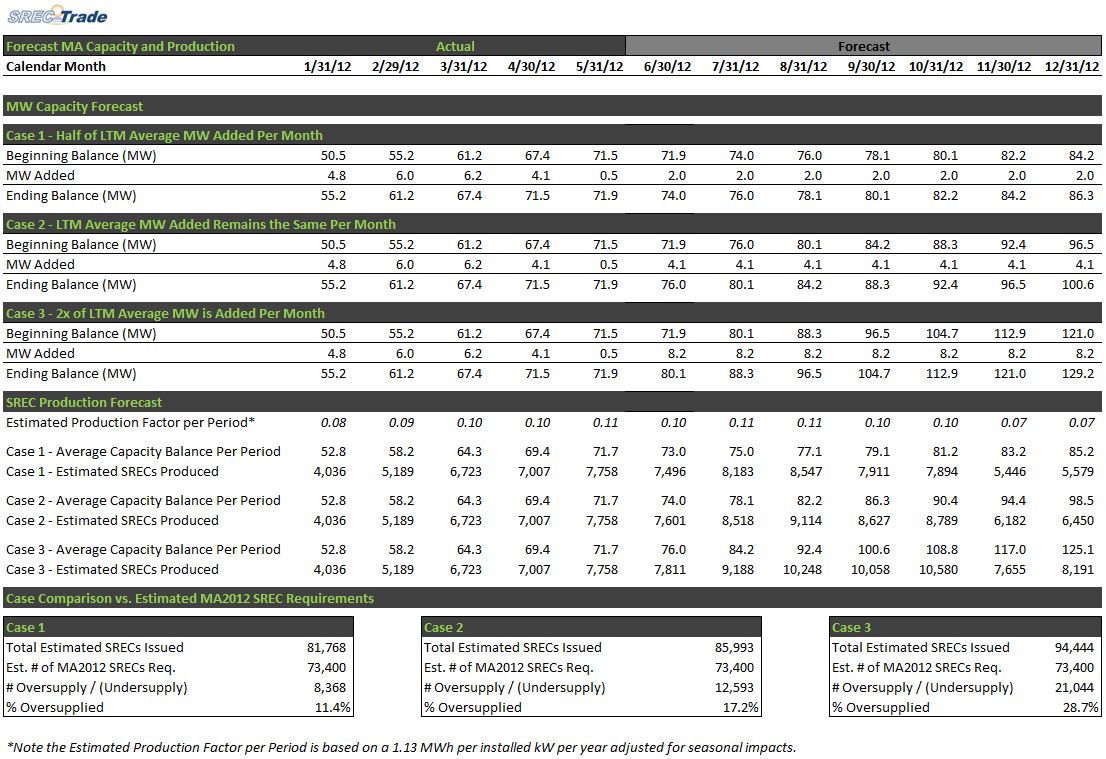 As demonstrated in the cases above, each scenario forecasts oversupply for the 2012 period. Furthermore, adjusting Case 1 to reflect no solar installed in the 2nd half of the year, the market would still see oversupply of approximately 5,400 SRECs, or 7.3% of the estimated MA2012 requirement.

This outlook has had downward pricing pressure on both the 2012 vintage as well as future periods. 2012 SRECs have traded down from 2011 prices, recently trading around $300/SREC. Additionally, multi-year forward contracts for delivery beginning in 2013 are trading below the Solar Credit Clearinghouse Auction price; below $200/SREC.

In August 2012, the DOER will release a statement announcing the 2013 compliance year obligation. The SREC compliance obligation is set by a formula per regulation 225 CMR 14.07 (2)(d). The formula for 2013 is currently set as follows:

The table below estimates what the 2013 requirement may be under each scenario presented above. It is important to note the 2012 Compliance Obligation is presented without exemptions as it was done for 2011 when calculating the 2012 obligation. Additionally, the ACP volume for 2011 was determined using our estimated 2011 requirement after exemptions less 2011 actual generation, as this would be reflective of the full number of ACPs paid.

The forecast figures demonstrate that a substantial amount of generation, ~36,300 SRECs, would be reduced from the 2013 requirement given the volume of ACPs paid for 2011 compliance requirements. In Case 3, this would put the market at oversupply prior to the beginning of 2013, while Case 1 and Case 2 would need less than the current LTM average installed capacity per month to be installed in 2013.