End of year installation rush amid repeat of 1603 concerns

The 1603 Grant Program is set to expire on December 31st 2011, prompting a rush of end-of-year installations and a strong industry push to extend the program for another year. The  Treasury Department’s, 1603 Program is a 30% grant on the cost of renewable energy systems. The Program was created after the financial crisis in 2008 when it was difficult to find tax equity investors to take advantage of tax incentives like the federal Investment Tax Credit (ITC). In order to qualify for 1603 Grant funds projects must have invested 5% of the cost of the system prior to 12/31/11 or have done “physical work” on the project, prompting a surge in end-of-year equipment purchases and contract negotiations. It’s unclear if the program will be extended and many solar developers are not taking chances. The necessity of the 1603 Grant and uncertainty about its future is the likely culprit responsible for the recent surge in solar installations in NJ despite, the crash in SREC prices from $640 this spring to $225 this month.

This is not the first time that the solar industry has seen a 1603 driven end-of-year rush to go solar. The program was set to expire on 12/31/10, but was extended at the last minute after heavy industry pressure. Visit SEIA for more information on the 1603 Program and how you can support its extension.

Tags: 1603, Solar
Posted in Grants and Rebates | Comments Off on End of year installation rush amid repeat of 1603 concerns

The New Jersey Office of Clean Energy (NJ OCE) recently released installed solar capacity figures as of August 31, 2011. After the first three months into Energy Year (EY) 2012, the state has averaged a rate just over 30 MW/month, bringing the total installed capacity to more than 430 MW, up from 339.6 MW at the end of EY2011. In order to meet the state’s fixed production requirement of 442,000 SRECs this year, approximately 370 MW needs to be online throughout the entire compliance period.

The 2012 spot market traded up to $200+/SREC in recent periods with the October auction clearing at $205. The estimated average installed capacity needed to meet the EY2013 requirement is approximately 500 MW. To reach this target by the beginning of EY2013, the state would have to install an additional 70 MW, or an average of 7.8 MW/month for the remainder of EY2012. This calculation takes into consideration the capacity needed to generate enough EY2013 vintage SRECs, which could be reduced based on EY2012 vintage SRECs used to meet the EY2013 compliance obligation. 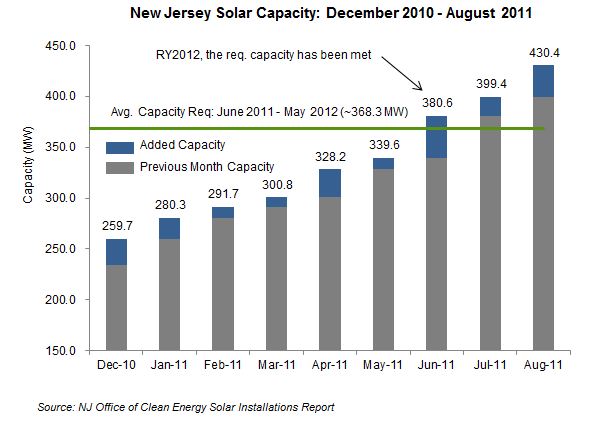 Note: This analysis is based on capacity as of the dates noted and does not take into consideration the impact of EY2012 vintage SRECs used to meet the EY2013 requirement.