New legislation which would modify Delaware’s Renewable Portfolio Standard (RPS)  has passed in both of Delaware’s legislative bodies and is awaiting the Governor’s signature. This bill, titled SS1 for SB119, will change the RPS by increasing and extending the required minimum percentage of renewable energy supply and contribute to the growth and longevity of the SREC market in Delaware.  The RPS currently requires that 20% of energy come from renewable sources. The new legislation will expand this requirement to 25% by 2025 and will also increase the proportion of renewable energy which must come from solar generation each year. For example, for the 2011 compliance year the solar requirement will change from .048% of the renewable energy mandate to .2%.

Key Changes:
1. The number of SRECs required will dramatically increase
2. The SACP which sets a ceiling price for SRECs will be raised to levels competitive with other states
3. The municipal utilities that have been exempt thus far will now be required to comply

The alternative compliance payment (ACP) an energy supplier must pay if failing to meet the solar requirement will also increase following this bill being signed into law. The solar ACP will strengthen from $250 to $400 per missed SREC, with this payment increasing to $450 if an ACP were paid in the previous year and to $500 if non-compliance continued for a third year. This will effectively raise the ceiling on SREC prices in Delaware to $400+.

The legislation also adds a premium to SRECs produced by systems created by in-state resources.  An additional 10% credit toward meeting RPS requirements is granted for any SREC obtained from a facility constructed or installed with at least a 75% in-state workforce.  The same credit is granted for systems with at least 50% of their components manufactured in Delaware.  These provisions together will likely lead to a premium on SRECs from in-state solar systems.

Though well-intentioned, it is unclear how the state will track this premium given that it essentially will result in two markets for SRECs… one for normal SRECs and one for the special “Made by Delaware Labor” SRECs.  Other states have tried to implement various types of multipliers with limited success and more likely resulting in more trouble than their worth.  However, it could be particularly useful in giving an advantage to local Delaware companies on the larger projects that face tough competition from well-capitalized out-of-state developers.

Nonetheless, the intent is clear: Delaware wants to develop a strong solar industry in-state.  This is a positive sign for the solar market there and in some ways a contrast to other states.  SREC markets have a variety of benefits to a state.  Besides a move to renewable energy, a properly setup program will also encourage the development of a commercial and residential solar industry.  In some cases,  like New Hampshire and North Carolina, the state will benefit from the former, but it doesn’t necessarily mean a boost to the latter.

Overall this is a huge win for the Delaware solar industry.  Today, most of our customer base from Delaware sells their SRECs in the PA or DC markets.  It will be great for them to know that their future SRECs will likely be sold in their home state!  Delaware now joins Maryland and New Jersey who have also passed recent legislation directed at strengthening their respective SREC markets. 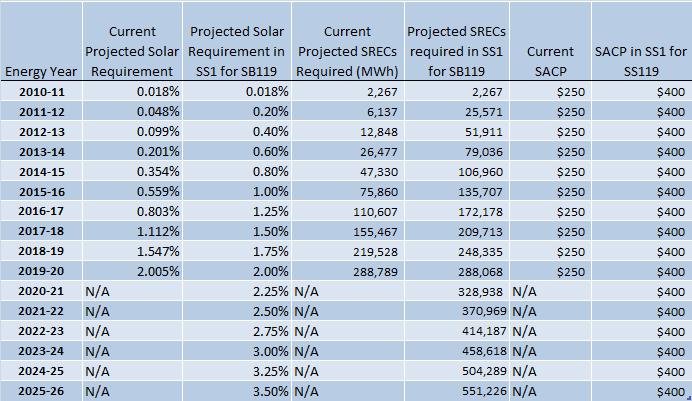 Chart numbers are based on 2007 electricity sales into Delaware assuming a 1.5% annual growth rate