Pennsylvania House Bill 2405 and House Bill 1128 are no longer on the table in Pennsylvania. The Bills were intended to strengthen the PA SREC market but both included critical flaws such as the exclusion of previously qualified facilities in HB 2405 and incredibly low ACPs in HB 1128.  At this point it is unlikely that there will be any changes to the PA SREC market any time in the near future.

HB 2405 was sponsored by Democratic Representative DePasquale who confirmed that the recent election squashed any chances that the Bill would be up for a vote any time soon. The Bill had proposed to strengthen the Pennsylvania Renewable Portfolio Standard solar carve-out to require 3% of the state’s electricity supply to come from solar generation facilities by the 2025 reporting year. This would have increased the current requirement by 6 times the 2025 reporting year target. In addition to the increase in capacity, HB2405 also intended to set the solar alternative compliance payment at a level of $450/MWh in the 2012 reporting year and slowly decline the SACP each year over the life of the program.

HB 1128 was created as a watered down version of 2405. It was viewed as a Bill that had fewer contentious points and was initially focused on simply increasing the solar requirements in the state moving forward. The Bill garnered the support of the solar lobby until it was amended by the Department of Environmental Protection (DEP) to include a drastic decrease in the ACPs paid out by non-compliant energy company. This decrease would have devastated the SREC market in Pennsylvania.  As a result of the DEP’s changes, HB 1128 was dead on arrival.

The open SREC market in Pennsylvania is vulnerable to a collapse in pricing. Unlike in states like New Jersey (approximately 255 MW required) where requirements are high enough to outpace significant growth, the PA SREC market (approximately 27 MW required) is still small enough to be vulnerable to oversupply, especially given the influx of solar from the entire PJM region.  There is a growing disconnect between the supply in the market relative to demand that could create challenges for the solar industry. Facilities are being built based on current SREC pricing that may not be available at the current pace of installation in the state and surrounding regions.

The PA legislature needs to take into consideration bringing another Bill forward to continue to support the solar industry and SREC market in the state. The key issues would need to focus on increasing the solar capacity requirement, setting a competitive alternative compliance payment, similar to other SREC states, restricting the size of SREC eligible facilities in the early years and allowing for electricity suppliers to meet their compliance requirements through the most efficient means possible. In addition, real-time, transparent information regarding the rate of installation and SREC pricing paid by utilities needs to be addressed along with steps taken to prevent a market collapse.

If there is any good news coming from the demise of these two Bills, it is that buyers that have adopted a “wait and see” approach can now move forward with business as usual.  There is no reason to think that out-of-state SRECs in Pennsylvania will be excluded any time soon, nor is there any reason for buyers to hope for a lower ACP payment. If anything, the demise of HB 1128 is an indication that attempts to set below market ACPs will not be successful.

House Bill number 2405, currently waiting for review in the PA house of representatives, contains many changes that would significantly alter the PA SREC market. The Bill has yet to be subjected to a vote, largely because its supporters understand that the bill is a solid 10-15 votes shy of the 102 votes it would need to pass the 203 person house of representatives in Pennsylvania. The House is currently not in session, so the Bill remains stagnant for now, and is most likely not to be voted on before the legislative period ends in November.

Notable changes in the Bill include a six-fold increase in the solar requirement for utilities. The requirement is currently slated to reach .5% by the 2024-2025 energy year, but would be 3% in this same year if Bill 2405 were passed. The Bill would also set an SACP of $450 per credit starting in 2011, decreasing by 3% each year. The SACP as currently stated in PA is double the average price of SRECs in the state for each year ($550 for 2010). The bill would also close the Pennsylvania SREC market, limiting buyers to SRECs exclusively from in-state solar facilities. Each of these changes is geared toward promoting the growth of the solar industry in Pennsylvania, keeping the job creation and other economic benefits local.

Changes from this bill, if it is passed, would be scheduled to be put in place on December 31, 2010. Regarding systems from out of state that have already been approved for the Pennsylvania AEPS program, unfortunately, if this legislation passes, buyers will be unable to purchase SRECs from out-of-state, even if they have previously been accepted into the Pennsylvania AEPS program.  The pending legislation states the change shall apply to “all contracts and short-term purchases made after December 31, 2010.”

This Bill is still a long way from being passed. In order to become law, the Bill would need to gain the extra 10-15 votes it needs in the PA House of Representatives, presumably through key revisions, and then pass the state Senate as well. Because the representatives are currently on summer recess, these changes do not appear to be imminent, but could be on the horizon.

Here is a table detailing the changes made by PA HB 2405, and comparing them to the market under current legislation: 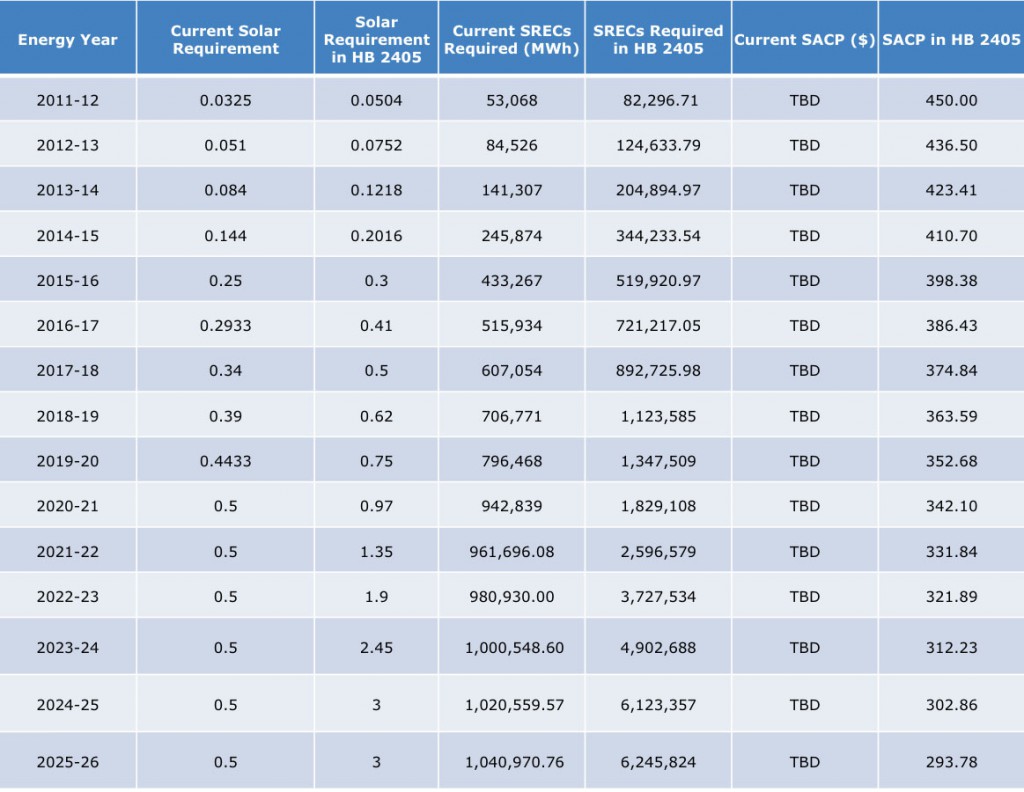 For more information, click here to see the entire Pennsylvania House Bill No. 2405