On Monday, October 24th PennFuture, Vote Solar, the Solar Alliance, and SUNWPA will hold a Solar Advocacy Day and Evening Reception at the Capitol building in Harrisburg. If you are part of Pennsylvania solar community this is an opportunity to educate policymakers and the media about solar in your state. The main focus of the advocacy day will be the support of the Solar Jobs Bill, which we’ve written a few blog postings about.

Here are the websites for the participating groups:

Click here to take action. Use the link to let your local PA state representative know that you support solar in PA.

If you have an advocacy event that you’d like SRECTrade to know about please email installers@srectrade.com

The Pennsylvania 2011 SREC compliance year has seen a substantial amount of solar development. Solar capacity registered within the state has lead to a significant oversupply resulting in an 85% decline in spot market trading throughout the course of the 2011 reporting year.

Fortunately, Representative Chris Ross has proposed an amendment to the PA Alternative Energy Portfolio Standard.  The amendment would modify the eligibility criteria so that only in-state systems could register in Pennsylvania after January 1, 2012.  Furthermore, the solar carve-out requirements for energy years 2013, 2014, and 2015 would increase from approximately 71 MW, 118 MW and 205 MW to 207 MW, 238 MW, and 290 MW, respectively.  These proposed changes should strengthen the market by increasing solar requirements and closing off out of state supply.  However, the oversupply of SRECs in 2011 and 2012 will carry over into the 2013 solar year and may keep prices low.  Given the legislature is out of session until October, further development will not occur until late 2011.

If new legislation does get passed, the market may shift from an oversupplied market to an undersupplied market.  This shift could result in an increase in future SREC pricing. One of the determining factors for price is the Alternative Compliance Payment (ACP).  In some states, NJ for example, the ACP is set by law and is known for future years.  Buyers know exactly what the alternative payment will be, and thus have a basis for the maximum value of an SREC.  In PA however, the future ACP is not known.  The ACP is calculated based on the average price paid for an SREC during the current year with weighting to include solar rebates.  For Chris Ross’s amendment to be truly successful, it will not only have to address the oversupply, but the ACP price as well.

To get involved with advocating for solar legislation, the Pennsylvania Division of the Mid-Atlantic Energy Industries Association (PASEIA) is a group of solar professionals who advocate for the interests of solar energy and a strong local PA industry.  Their blog has some good information on the status of the bill. 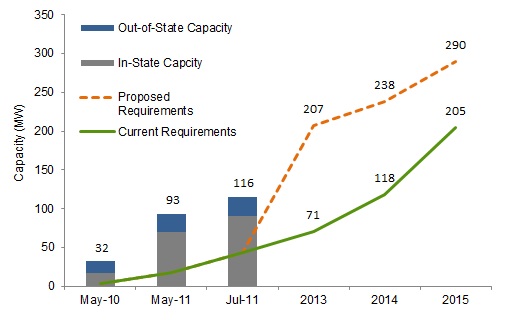 Note: Capacity (MW) forecast based on PA RPS requirements and SRECTrade estimates.  Capacity (MW) figures presented for May 2010, May 2011, and July 2011 based on registered systems in GATS as of date listed. The current requirements (i.e. green line) as of July 2011 demonstrates the capacity (MW) required for the 2012 reporting year; approximately 44 MW. Figures for 2013-2015 represent the estimated amount of installed capacity (MW) needed on average throughout the compliance year.