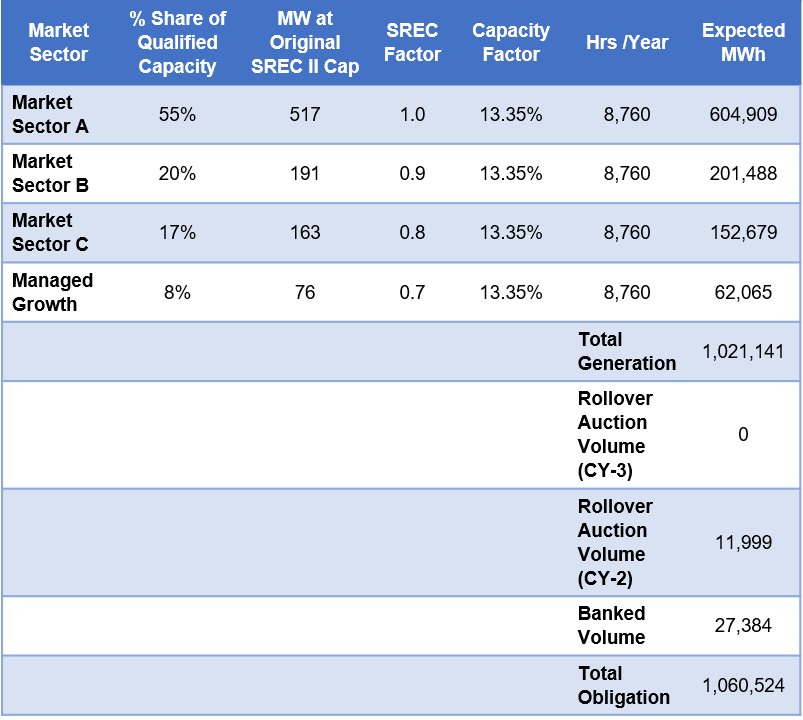 Details regarding this announcement can be found here. SRECTrade will be assessing the implications of this adjustment and informing our constituents accordingly.

While the Solar Massachusetts Renewable Target (SMART) Program Effective Date is still to be announced by the Department of Energy Resources (DOER), the application timelines for SREC-II have been set.

As a reminder, the SMART Program Effective Date will be the deadline for facilities smaller than or equal to 25 kW DC to be interconnected and facilities larger than 25 kW DC to be mechanically complete. This means that documentation must be dated on or before the Effective Date, but applications can be submitted for some time after.

Facilities larger than 25 kW DC will have two weeks after the SMART Program Effective Date to submit their documentation demonstrating mechanical completion. Once granted, mechanically complete extensions are indefinite – facilities should simply submit their Permission to Operate (PTO) documents once they are received to complete their statement of qualification application.

Facilities smaller than or equal to 25 kW DC will have until November 15th to submit an application demonstrating authorization to interconnect. In other words, the PTO must be dated on or before the effective date, but the applications can be submitted to the DOER up through November 15th.

SRECTrade, Inc. is pleased to announce that our online application for the Massachusetts Alternative Portfolio Standard (APS) program is now open. We will be hosting a webinar covering the APS program and the SRECTrade on-boarding process on Wednesday, March 7, 2018 at 2:00pm EST.

On November 13, 2017 the Department of Energy Resources (DOER) announced that CLEAResult, Inc. will be the Solar Program Administrator for Massachusetts’s SMART Program.

The Distribution Companies have developed a request for proposals (RFP) for approximately 100 MW of solar projects in their respective utility service territories. The Distribution Companies will be hosting a bidder’s conference on Friday, November 17, 2017 at 1:00 PM EST to provide additional information and answer questions. Written comments on the RFP will be accepted through November 20, 2017 at 12:00 PM EST and should be submitted to ma.smart@clearesult.com. Bidders can submit an application on CLEAResult’s application website from November 27, 2017 – December 5, 2017 at 5:00 PM EST.  Results will be announced by the DOER by January 11, 2018. These results will establish the Block 1 Base Compensation Rates under the SMART Program.

The full announcement by the DOER can be found here.

As a reminder, systems must be mechanically complete or commercially operational by March 31, 2018 in order to participate in SREC-II under the current SREC Factors. Factors will be further reduced after this date but will remain at 0.8 for systems less than or equal to 25 kW.

On October 13, 2017, the Massachusetts Department of Energy Resources (DOER) filed an amended draft regulation with the Legislature’s Joint Committee on Telecommunications, Utilities and Energy. Pursuant to Chapter 251 of the Acts of 2014 and Chapter 188 of the Acts of 2016, the draft regulations add renewable thermal, fuel cells, and waste-to-energy thermal to the Massachusetts Alternative Portfolio Standard (APS). The filing follows two rounds of public hearing and comment periods occurring in the summers of 2016 and 2017. The draft regulation and accompanying guidelines are available on the DOER’s website here.

In response to stakeholder comments, the DOER made several revisions in the filed regulations. A brief summary of these changes is provided here, but the full redlined version is available for review here.

In addition to the foregoing, the DOER made several technical edits and clarifications to reconcile language inconsistencies in the regulation and Guidelines. The DOER’s announcement of the filing is available here.

SRECTrade will continue to monitor the progress of the APS regulations and will provide updates as they are made available.

On Friday, August 25th, 225 CMR 20.00 Solar Massachusetts Renewable Target (SMART) Program was promulgated in the State Register. The Massachusetts Department of Energy Resources (DOER) posted the final version filed with the Secretary of the Commonwealth’s office to their website. The DOER announced that the final, promulgated version will be made available as soon as possible.

Following the promulgation of this regulation, the DOER anticipates that the electric distribution companies will jointly file a model tariff at the Department of Public Utilities (DPU), which will initiate a fully adjudicated proceeding at the DPU.

For more information on the final version of the SMART Program regulation, please visit our previous blog post on the topic here.

Following comments regarding the initial 100 MW Procurement, which will be used to establish Base Compensation Rates for all participating SMART Solar Tariff Generation Units, the following changes were made to program design:

In its regulation filed on June 5, 2017, the DOER implemented an adder cap of 320 MW for each individual Compensation Rate Adder in an effort to “place boundaries around overall program costs”. In response to comments regarding these adder caps, the following changes were made:

Following comments regarding the rules set forth by the DOER around parcel limits and project segmentation, the following modifications were made:

These project segmentation rules were initially established to prevent Solar Tariff Generation Units from manipulating program rules for their own financial benefit.

Land Use and Performance Standards

The DOER has also set forth rules to ensure that land use is considered when siting projects through the differentiation of incentive levels based on project location. In response to comments regarding these rules, the following changes were made:

In response to other comments received by stakeholders, the DOER also instituted the following changes:

The DOER will notify stakeholders when the regulations have been published in the State Register in final official form.

The six regulations and amendments include:

For more information on these regulations, including Fact Sheets, please visit the MassDEP website on the topic.