This morning, the DOER provided an update on both the Next Generation Incentive Program and the transition between SREC-II and the new program.

The DOER  will present the final proposal for the design of the Next Generation Incentive Program at a public briefing on January 31, 2017. Per the DOER’s update, the “proposal will be used by DOER as the framework for the regulation to implement the program, which DOER plans to file in the coming weeks.”

Due to the expected timeframe for the implementation of the Next Generation Incentive Program, the DOER is in the process of implementing interim measures to bridge the gap and ensure a smooth transition between SREC-II and the new program. The DOER will provide additional details regarding these interim measures in the January 31st meeting.

Information for the meeting is as follows:

The Federal Reserve Building requires a list of all attendees in advance of the meeting. If you plan to attend the meeting, the DOER requests that you please fill out this form to RSVP by 5:00PM this Friday, January 27, 2017.
Tweet

The Next Massachusetts SREC Program

On Monday, the Massachusetts Department of Energy Resources (DOER) held a Stakeholder Meeting to discuss the most recent updates to the RPS Solar Carve-Out II Proposed Design (SREC II). Our CEO, Brad Bowery, was in attendance. The specific details of the program can be found in the presentation posted on the DOER website. Here we’ll take a crack at understanding each of the design elements.

Declining ACP and Price Support Schedules
Like the original RPS Solar Carve-Out (SREC I), SREC II will have a declining ACP schedule that projects 10-years forward and sets an upper bound for the market. However, instead of a flat lower bound of a $285 Last-Chance Clearinghouse Auction price, SREC II will have a 10-year declining auction price schedule. The schedule initially drops from $285 to $271 in 2017 and continues down to $189 in 2024. 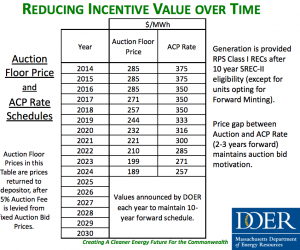 Analysis: The auction price is intended to provide price support for the market, but it also has the potential to lead to artificially inflated prices if the costs of installing solar drop dramatically over this period. In the last proposal, the DOER introduced a schedule for a declining SREC factor as a solution for addressing decreasing costs. This change reduces the complexity of the SREC factor (as we’ll see) while the decreasing upper and lower bounds of the market guides SREC prices downward over time, which is reasonable given that installation costs are expected to decrease over time.

Market Segments and SREC Factors
Unlike SREC I, SREC II will create 5 market segments that are treated differently in the market. Generally speaking, the segments are: 1) residential (<25kW, as well as parking canopies and emergency energy backup projects), 2) all commercial used on-site, 3) landfills/brownfields, 4) small-commercial off-site use (<500kW) and 5) large-commercial off-site use (>500kW). To qualify for on-site, 67% of the production must be used at the site. Each segment will have its production adjusted by a factor that ranges from competitively bid (segment #5) to 0.7 to 0.9 for the other segments. Once established, the SREC Factor remains fixed for the life of the project. So, for the residential segment, 90% of the generation counts towards SRECs. Any remainder is ineligible for RECs. 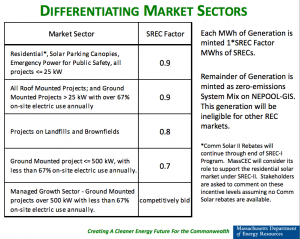 Analysis: The idea here is that different segments of the market have different cost structures. This is similar to the underlying idea behind the concept of an SREC market. Since other renewables have different cost structures, it is unfair to force them to compete on the same playing field, so a solar-specific SREC market is created. In this case, the various segments of the solar industry also have different cost structures. Instead of creating separate markets for each segment, the SREC Factor is used to even the playing field. Considering the alternative of separate markets for each segment, this is the simplest way to address the underlying issue. This proposal includes a couple other changes. Most notably, the declining SREC Factor schedule was removed in favor of the aforementioned declining Auction price schedule to address declining costs. In addition, the remainder of generation that is factored out of SREC production no longer can be counted towards RECs. This was an onerous twist to the program that would have required participants to follow both the REC and SREC markets. To account for the potential loss of revenue, the DOER increased the SREC Factors across the board in this proposal.

SREC Factors and New Projects
With 3 months notice, the DOER can reduce the SREC factor for new projects only if the program is reaching its cap, or if substantial external forces are putting downward pressure on costs. Inversely, the DOER can also increase the SREC Factor immediately to respond to external forces that dramatically increase costs. One example is if the federal tax incentive were to go away.

Analysis: This tool allows the DOER to slow or speed up growth of supply in the market in response to external forces. It should serve to reduce volatility in boom and bust times. The key here is that under no circumstances can the DOER change the SREC Factor for an existing project. So each potential project affected will know of any changes before it is completed. That said, this does complicate things for larger projects that take more time to plan.

Managed Growth Segment
As mentioned above, the segment of the market above 500 kW where less than 67% of the production is used on-site will have their SREC factor competitively bid. For these projects, the DOER will host no fewer than 2 solicitations per year for a capacity amount determined by the DOER based on the existing supply in the market.

Analysis: Previously, the SREC market in Massachusetts was limited to 6 MW projects or less. With this rule in place, the DOER has shifted the focus away from size and towards whether or not the project is built to service it’s own on-site needs or if it is designed to sell power into the grid like any other electricity generator. This latter segment seems to be most likely to drive significant capacity growth, so this tool could be a very effective way to reduce volatility in the market, without throttling the majority of solar projects. It leaves room for these projects, while also forcing them into a competitive process in order to qualify for the program.

Forward Minting of SRECs for Residential
Residential solar projects will be allowed to create 10 years worth of SRECs at the onset of the project. The forward-minted production will be based on PV Watts estimates and the facility owner will be required to report production and fall within 80% of the estimate or face a penalty. The DOER may discount the number of SRECs that are forward-minted. Sellers will have 3-years to sell their forward-minted SRECs.

Analysis: This rule was put in place to promote more direct ownership at the residential level, which according to the DOER, has seen a drop off in penetration. If your system is estimated to produce 10 SRECs per year for 10 years, you can opt to receive them all in one batch of 100 SRECs (or less as determined by the DOER discount) to sell in the market in one of the next 3 years. This will greatly simplify the offering to residential customers for a few reasons. First, they won’t need to analyze the long-term prospects of the SREC market. At a minimum, a seller can estimate what the forward-minted SRECs can sell for in today’s market. Second, it effectively converts a long-term, uncertain cash payment into a rebate that will most-likely be paid back within 12-months. This should help considerably with cash-financing systems. The tricky part will be the impact that forward-minting has on the market. That said, if 100% of the cash-financed residential systems forward-mint and sell all their SRECs in year one, none of them will have SRECs to sell in any subsequent year. Given the small portion of the market that this applies to, it shouldn’t be a significant factor. In this simplified scenario, while the SREC capacity of other segments will grow cumulatively, the forward-minted potential of the residential sector will reset every year and will only grow based on the incremental growth of residential solar in any given year. When modeled out, it shouldn’t have as much of an impact as one might suspect on the surface.

Compliance Obligation Schedule
Based on DOER assumptions of installation weights, solar factors and forward-minting, the compliance obligations for 2014 and 2015 are proposed to be set in regulation at 129,338 SRECs in 2014 and 256,686 in 2015. Beyond that, similar to SREC I, a formula will be used to set the requirement by August 30 of the previous year.

Analysis: This is a positive development for projects currently planned that were unable to qualify for SREC I as it provides certainty that there will be a requirement for SREC II in 2014. The requirement allows for 143 MW to be added in 2014 and another 152 MW in 2015.

Summary
We were a bit concerned with the complexity of the last proposal, particularly around the introduction of forward-minting and SREC factors. It appears that the DOER is sticking with these concepts, but has made some changes that reduce complexity and move this proposal in a positive direction, without compromising the underlying benefits of the new design. While we will leave the specifics of appropriate values for ACPs, Auction prices, SREC factors, forward-minting discounts and compliance obligations to the solar finance experts, our comments will focus on the implementation and mechanics of the marketplace.

The biggest difference between SREC I and SREC II is that the newer program seeks to address the different cost structures of the various types of solar installations. To this effect, structurally, the most-recently proposed SREC factoring scheme accomplishes this in a relatively simple way considering the alternative of creating separate SREC markets for each segment. While the alternative would be the purest way to promote a fair, competitive market for each segment, the administratively set SREC factors allows the state to maintain one SREC market that caters to all segments. That is the beauty of this proposal. All the complexity occurs before the point at which SRECs are created. Once the SRECs are created, they will trade, unencumbered in an open market. Every participant will be able to point to the same set of market rules and the very same SREC prices. How they interpret those prices will vary based on the SREC factor of the project, but once a participant has his or her SRECs, the monetization of those SRECs will happen in a uniform, increasingly liquid market.

Now there are two caveats to that statement. First, re-minted auction SRECs from 2012 (and any other year moving forward) have a different set of attributes, that would result in buyers valuing them differently than normal SRECs. This could lead to a separate market for re-minted SRECs in 2013. Similarly, the forward-minted SRECs, could also carry a different set of attributes since they will be good for 3 years. This could lead to a 3rd market price for Massachusetts SRECs. In an ideal world, a MA 2012 SREC is a MA 2012 SREC is a MA 2012 SREC. There is one market, one price and one large pool of liquidity. When that isn’t the case, there will be one large pool of liquidity and two smaller pools of compromised liquidity. This is the only area of the current proposal where the complexity plays out AFTER the SRECs are created.

Next Steps
DOER is interested in receiving public comments on the final proposed design. Comments are due by August 26th and can be sent electronically to DOER.SREC@state.ma.us. In the Subject line, they ask that you put “Comments: SREC-II Final Proposed Design”