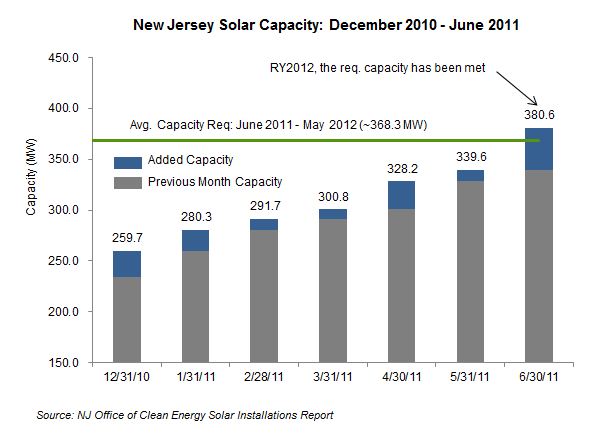 The July New Jersey SREC auction on SRECTrade.com cleared at $555 earlier this week, an $85 drop from $640 where NJ SRECs have traded since the beginning of the year. Today, the results of the NERA SREC auction on behalf of the four regulated Electric Distribution Companies (EDCs) closed at $475 per SREC. This is the auction used by PSE&G, ACE, JCP&L and RECO to sell the SRECs they purchase from the solar facilities that contracted in the various long-term SREC RFPs, such as the Solar Loan Program.

Meanwhile, the most recent data on SRECs created in New Jersey was reported by the Office of Clean Energy through May (generation through April). After 11 months, the state has created 220,000 2011 SRECs. The requirement is 306,000 SRECs. In April, there were about 40,000 SRECs created by the installed capacity and with one month to go, and over 80,000 SRECs short, it is highly unlikely that the state will meet its target. New Jersey will probably end up with somewhere between 85% and 90% of the requirement – which is pretty successful given how low relative capacity was at the beginning of the year.

That said, SREC prices have fallen despite the under-supply. The market could either keep falling to levels similar to the $475 price in the NERA auction or it could turn out to be a lull in the market before 2011 trading comes to a close in September. Here are few possible explanations as to why prices might fall at this time of year despite a shortage:

1. The 4th of July holiday coupled with a large influx of supply from May SRECs created July 1 means buyers may not been as active, while the volume of sellers increased.
2. At this point in the year, the aggressive buyers have purchased the SRECs they need, leaving the market to less-competitive buyers, who will pay less or opt for the fine.
3. Since New Jersey has a fixed SREC requirement, the BPU must notify each buyer what their total SREC requirement is based on their pro rata share of electricity sales. Without that information, buyers have a harder time estimating their requirement than in past years when it was based on their own electricity sales. Until the BPU publishes the final requirements, buyers will likely hold off on their final purchases.

Either way, 2011 trading will end in September and 2012 trading will pick up next month as the first 2012 SRECs are created. Next year will be a big year for the SREC concept in general. For the first time since 2008, SREC prices in New Jersey will be set by the market, not by the SACP. The SREC market concept will be tested on a large scale with a pure SREC-only policy – something that was missing in Pennsylvania when supply shot through the roof last year. If dropping SREC prices have the intended effect, the rate of installation in New Jersey will slow down to 10-12 MW per month for the next few years. If it doesn’t slow down, prices could be in trouble.

For now, the immediate concern has to do with whether or not buyers will return to the 2011 market before the trading period ends. Given what 2012 has in store, at the very least, it would be prudent to make sure to sell 2011 SRECs before September 30.