Two years ago, Ohio took a gamble with the state’s renewable energy industry by imposing a two-year freeze on Ohio’s energy efficiency (EERS) and Renewable Portfolio Standard (RPS). With the freeze due to expire at the end of the year, state lawmakers are evaluating potential paths for lifting the freeze, including opposing options to either bolster the RPS moving forward or convert the RPS to a voluntary program. As state lawmakers look to vote on proposals shortly after the November 8th General Election, nine companies have stood up in support of reinstating–and strengthening–Ohio’s energy efficiency and RPS, alongside the state’s many clean energy advocates.

It is clear to many that the RPS freeze was a failed experiment for Ohio. The RPS has provided many benefits to Ohio residents, including the creation of thousands of new clean energy jobs and the infusion of more than $160 million in annual GDP from the clean energy sector. During the freeze, however, utility companies reduced–or in some cases completely suspended–renewable energy and energy efficiency programs and services. Clean energy companies had no choice but to leave Ohio. As a result, Ohio’s wind industry lost more than 1,400 jobs in 2015 alone. Today, Ohio’s projected growth for clean jobs is only at 4.9%. In order to get back on track, the industry needs a jolt of support that can only come from the reinstatement of the RPS and EERS.

In an effort to show solidarity with the clean energy industry, nine companies teamed up behind sustainability advocate Ceres Inc., encouraging lawmakers to consider more–not less–aggressive RPS and EERS policies. The companies, including giants such as Campbell Soup, Clif Bar, Gap, Nestle, and Whirlpool, collectively employ more than 25,000 people in Ohio. Each company issued individual statements in support of the coalition’s request.

Gap Inc.’s Director, Environmental Impact, Christina Nicholson urged lawmakers to act. “The time to act is now. We urge leaders in Ohio to lift the freeze on the state’s renewable energy and energy efficiency standards. Clean energy policies are smart and will build a stronger and more resilient Ohio. As a company with a large presence in the state, energy efficiency and renewable energy is important to our business and our future. We’ve set an ambitious goal to reduce our GHG emissions by 50% by 2020, and we encourage Ohio’s leaders to help us all move toward a clean energy future.”

Other groups, including Ohio Citizen Action, are also actively advocating for stronger environmental standards. The group is hosting a Climate Action Rally and Press Conference on November 16th to encourage Governor Kasich to take a stand against those trying to skirt or otherwise weaken the reinstatement of the RPS. Earlier this year, while seeking the Republication nomination for President, Gov. Kasich told a New Hampshire crowd that he would reinstate the RPS if the legislature attempted to gut the policies, even though he considered the original RPS to be “unpalatable”. Given the legislature’s current position on the issue, all eyes are on Gov. Kasich to see whether he sticks to his campaign words from January and pressures the Legislature to reinstate the RPS and EERS without further delay.

SRECTrade will host a webinar covering the latest pricing and supply numbers for the OH and PA SREC markets. 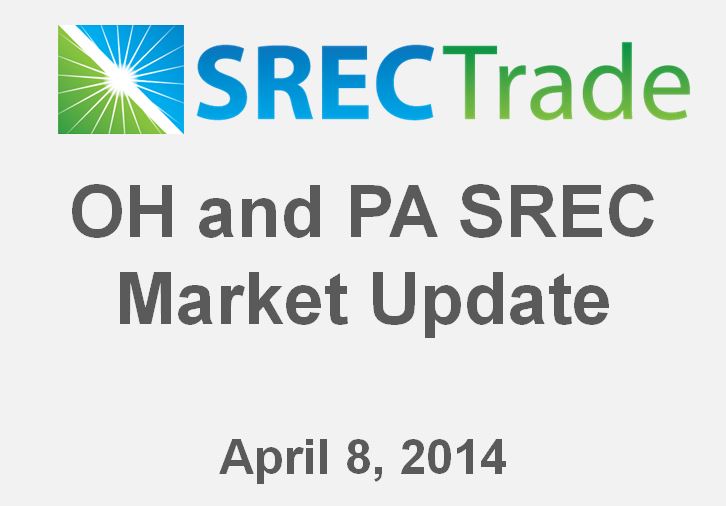 The utility noted they were able to successfully fill the requested volumes. The contracted supply will allow FirstEnergy to meet its 2011 RPS requirements including the SRECs not retired under their 2010 compliance obligations. The RFP received submissions from 28 qualified participants offering more than two times the requested SREC volumes and four times the requested REC volumes. Contract pricing was not disclosed.