On July 13, 2020, the Massachusetts Department of Energy Resources (DOER) announced final SRECs available for auction in this year’s Annual Solar Credit Clearinghouse Auction (SCCA) I and II, as well as the preliminary 2021 Minimum Standards for the SREC I and II programs.

On Thursday, July 25th, the Massachusetts Department of Energy Resources (DOER) announced that all of the MA2018 SREC Is and SREC IIs submitted to the auction account were transacted in the first round of the Solar Credit Clearinghouse Auction (SCCA).

A total volume of 9,780 SREC Is were bid on across 21 unique bidders, creating more than sufficient demand to clear the available auction volume of 632 SREC Is.

A total volume of 63,388 SREC IIs were bid on across 21 unique bidders, creating more than sufficient demand to clear the available auction volume of 4,626 SREC IIs.

DOER and EnelX are in the process of certifying and finalizing the auction results. More information will be made available on the SCCA webpage in the coming weeks.

If SRECTrade submitted SRECs to the SCCA on your behalf, we will provide further notice on the status of your transaction once the DOER and EnelX provide us with finalized auction results.

Today, the Massachusetts Department of Energy Resources (DOER) announced that both of the 2015 Solar Carve-out (SREC-I) and Solar Carve-out II (SREC-II) auctions have fully cleared in the first round.

The DOER and EnerNOC continue to certify and finalize the auction results, and will publicize more details on the final results on the SREC-I and SREC-II auction webpages next week.

Friday, July 22, 2016, the Massachusetts Department of Energy Resources (DOER) announced the preliminary 2017 Solar Carve-out (SREC-I) and Solar Carve-out II (SREC-II) Compliance Obligations and Minimum Standards. Customarily, the DOER estimates these values prior to administering the Solar Credit Clearinghouse Auction each year. The final 2017 Minimum Standards will be announced on or before August 30th, after both the SREC-I and SREC-II Auctions have concluded.

Notably, the DOER projects that the final 2017 Compliance Obligation for the SREC-I program will be approximately 783,181 MWhs and that the Minimum Standard will be approximately 1.6313%. These values will be increased to 785,077 MWhs and 1.6352%, respectively, if the SREC-I auction does not fully clear in the first two rounds. The 2017 Minimum Standard for load under contracts signed before June 28, 2013 will be 0.9861%.

The DOER published a resource outlining its calculation of the preliminary SREC-I Minimum Standard.

Regarding the SREC-II Program, the DOER established a baseline Compliance Obligation and Minimum Standard that would have applied to Retail Electricity Suppliers had the RPS Class I Emergency Regulation not been filed on April 8, 2016; these suppliers are exempt from any additional obligations resulting from the expansion of the SREC-II Program Capacity Cap.

To calculate this baseline Minimum Standard, the DOER first determined the expected MWh/year that would have resulted had the SREC-II Program Capacity Cap remained 947 MW by:

The DOER then summed these values and combined the auction volume and banked SREC-II volume from the 2015 Compliance Filings, resulting in a baseline Compliance Obligation of 1,102,311 MWhs and a Minimum Standard of 2.2960%. These values will be increased to 1,169,357 MWhs and 2.4357%, respectively, if the SREC-II auction does not fully clear in the first two rounds. 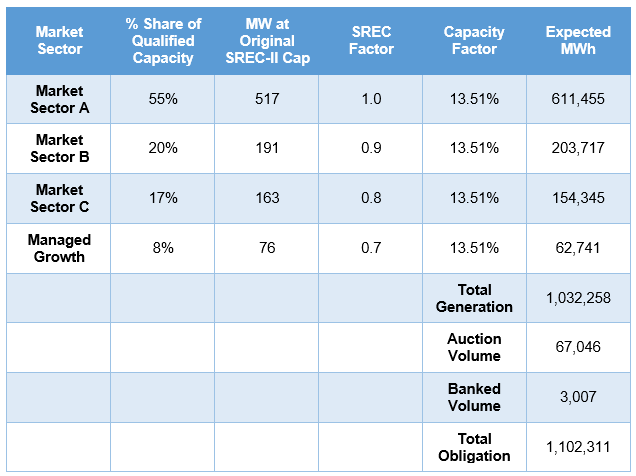 The DOER also published a resource outlining its calculation of the preliminary SREC-II Minimum Standard.

The first rounds of the SREC-I and SREC-II Solar Credit Clearinghouse Auctions are scheduled for July 29, 2016. A second and third round will be held as needed the following week should these auctions not fully clear.

The DOER has also provided slight updates to the volumes of SRECs available in the Auctions: 1,896 in SREC-I and 67,046 in SREC-II.

SRECTrade will continue to monitor the proceedings of the Solar Credit Clearinghouse Auctions and will report the outcomes of the Auctions once the results become readily available.

SRECTrade will host a webinar on Thursday, August 21st at 2 pm ET to review the Massachusetts SREC market.

The last several months in Massachusetts have been dynamic. The Massachusetts SREC-II program started on April 25, 2014. Also, sweeping legislation was proposed that would have fundamentally changed the Massachusetts solar  industry.

Items to be covered in Thursday’s webinar:

Register for the webinar here.

Completed applications must be submitted online at www.srectrade.com and include the following documents:

Final “Permission to Operate (PTO)” from the interconnecting utility

SRECTrade and Mike Judge of the DOER present the current status of the Massachusetts SREC-I program.  Additionally the webinar covers the regulatory process that the SREC-II program proposal must udergo before the SREC-II program may start. The webinar recording can be watched by clicking the image below. 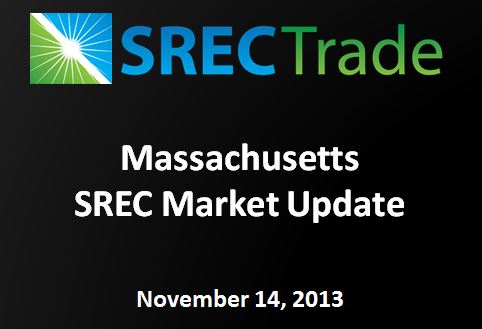 The eagerly awaited MA  SREC-II program promises to keep the MA solar industry in over-drive, but when will it start and what happens between now and then? We’ve previously noted in our blog and bulletin emails sent to installers that moving forward SREC-I is separated into two applicant categories. There is still uncertainty about the SREC-II program design and timeline for its implementation, but we know that it may be implemented as early as Q1 2014.

Projects eligible for SREC-I that are not fully interconnected by 12/31/13 must apply for an eligibility extension. Projects are eligible for extensions if they have spent at least 50% of the estimated project construction cost by 12/31/13.

SREC – I extension documents can be found here. Projects registered with SRECTrade should return these documents to us no later than Friday, 12/13/13 to guarantee that SRECTrade can send them to the DOER and confirm their acceptance.

SREC-II Is Still Not Official

We expect the DOER to formally propose the SREC-II program in early November 2013. Once this is done the proposal must undergo several formal review steps including a public comment period and legislative review period. Given these steps we anticipate that the review process will take 100 days or more. Assuming this timeline, the SREC-II program would be effective in February 2014.

Also, be aware that the formal proposal will likely include deviations from the DOER’s initial draft proposal that was submitted in August.

Here are the steps required prior to implementation of the SREC-II program.

Step #4 – Submit Proposal to the Joint Committee on Telecommunications, Utilities, and Energy

SRECTrade will host a webinar covering the Massachusetts SREC market on Thursday, 11/14/2013 at 2 pm EST. Sign up for the webinar by clicking here or the image below.

What the Massachusetts SREC webinar will cover:

*UPDATE- November 12, 2013:  It is unlikely that the DOER will formally propose SREC-II in time for Thursday’s webinar. The DOER is now targeting the end November to formally post the SREC-II proposal. We will still cover the timeline for implementing SREC-II once it is formally proposed.