The Q3 2011 (July – September 2011) MA SRECs were issued on January 15, 2012. Unlike other SREC markets, the MA Solar Carve-Out program mints SRECs quarterly, three and a half months after the close of the calendar quarter. In coordination with the Q3 2011 issuance, SRECTrade recently held a separate auction for MA2011 SRECs.

The auction closed on Tuesday, January 17th at 5:00 p.m. Eastern. SRECs transacted at a clearing price of $540.00 per SREC. The clearing price, more than 98% of the 2011 Solar Alternative Compliance Payment (SACP), represents a strong demand for MA2011 SRECs due to a shortfall of supply in the market. 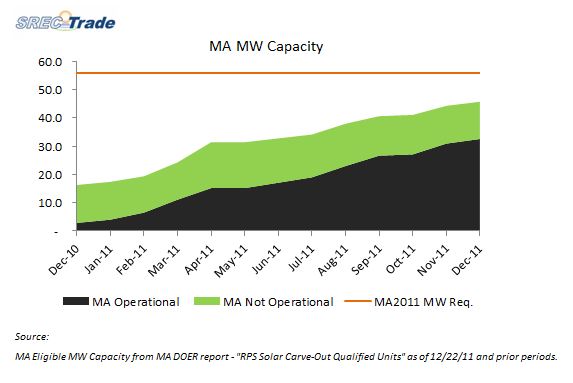 The next SRECTrade auction closes on Tuesday, January 31, 2012. This auction will cover all of the SREC markets including DC, DE, MA, MD, NJ, OH, and PA. The order window is currently open. All buyers and self-serve sellers can login here to place an order. Sellers utilizing SRECTrade’s management service, EasyREC, will have orders automatically placed on their behalf. If these sellers need to make changes to their minimum offer prices, they must do so prior to the order window close on January 31 at 5:00 p.m. Eastern.