The chart below demonstrates the existing RPS % versus the proposed percentage requirements under HB1187/SB791. 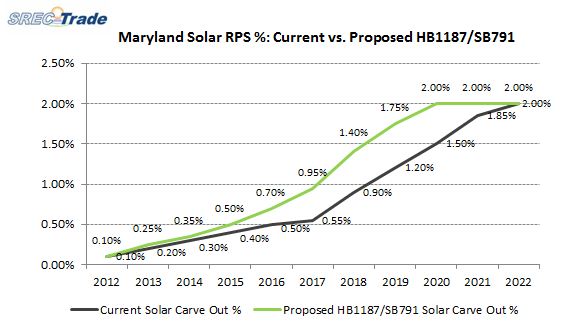 While the overall MD RPS solar goal does not change under HB1187/SB791, the amount of SRECs required increases in each of the interim years beginning in 2013 (SREC requirements are directly tied to the RPS % requirements). These increases could have a positive impact on SREC pricing if the market is unable to develop the needed supply during these future periods. Although the increases are meaningful (especially in the later years, see charts below), large projects such as First Solar’s20 MW Hagerstown, MDproject and Constellation Energy’s16.1 and 1.3 MW Emmitsburg, MDprojects can still substantially impact the SREC market. 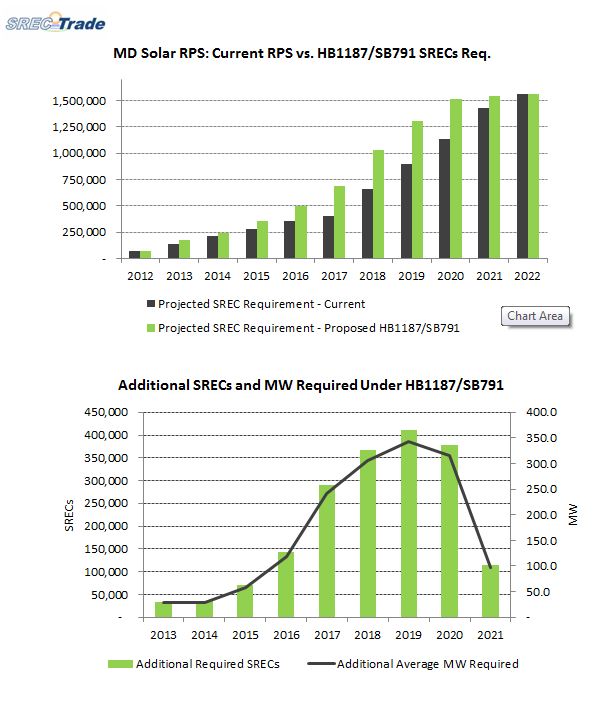 As of March 7, 2012,PJM GATS reported 41.8 MWof operational MD eligible capacity. Under the existing MD2012 RPS requirements, Maryland needs an average of 56.1 MW operational all year long, or 67,310 SRECs. Additionally, any left-over supply from 2010 and 2011 also can be used to meet MD2012 compliance requirements. Given continued development in the state, which has averaged approximately 2.3 MW/month over the last 12 months (LTM), and the larger projects noted above, the increase in capacity as proposed by HB1187 and SB791 would help absorb continued solar build out.

Maryland could expect to see approximately 102.2 MW of operational capacity at the beginning of 2013. This figure takes into consideration the online capacity as of 3/7/12, the impact of the Constellation and Maryland Solar projects (assumed to be fully operational by the end of 2012), and continued development at the same pace as the LTM period. The table below demonstrates how our estimated 2013 beginning balance capacity compares to the number of SRECs required under the current 2013 RPS requirements versus the proposed requirements under HB1187/SB791. 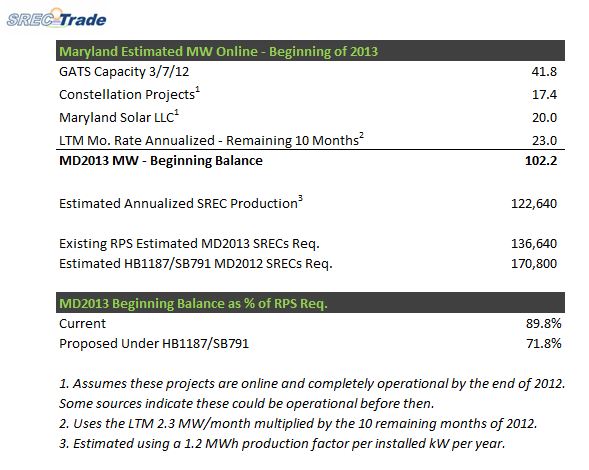 Earlier this week, HB1187, the House version of the bill, was heard in the House Economic Matters committee. A couple panels with industry analysts and regional installation professionals presented their thoughts on the impact of pulling forward the Solar RPS requirements. After the reading and the presentations, the bill was unanimously passed out of committee.

It is expected that the House bill will reach the floor for final vote later this week or early next week. Additionally, the Senate bill needs to be heard in the Senate Finance Committee before it can make it to the floor of the Senate. Should both sides of the legislature vote in favor of the bills, the final step would be to have it sent to Governor O’Malley to be signed into law.

In addition to HB1187/SB791, there are 2 bills in the MD House and Senate,HB864andSB595, which provide guidelines and regulations for investing, operating, and participating in the usage of electricity generated from shared community energy generation facilities. While Annapolis insiders suggest that these “community solar” bills have a way to go before they are implemented, important initial legwork is being completed to make community solar projects feasible. The highlights of the current versions of the bills include:

– Outlines who can be a qualified project owner

SRECTrade will continue to keep a close eye on the legislative process across these bills and provide updates as they become available.