The MA2012 SREC compliance year began in January 2012. There has been a lot of attention on the Bay State’s solar carve-out program and installation activity continues to pick up. A substantial under supply in 2010 and 2011 vintages resulted in SRECs pricing just shy of the alternative compliance payment (ACP). Moving forward many stakeholders are closely watching how supply will impact 2012 and future period valuations. The analysis below takes a look at current capacity levels and provides some insight into how the market may shape up in 2012.

As of March 6, 2012, the MA Department of Energy Resources (DOER) posted updated total qualified solar capacity figures. The DOER noted that due to a delay from MassCEC, the entity that approves all renewable projects in the Commonwealth, the project-level details of the total qualified capacity is not yet available. As of this writing, the DOER was still awaiting the information from MassCEC and noted an updated report would be published when available. 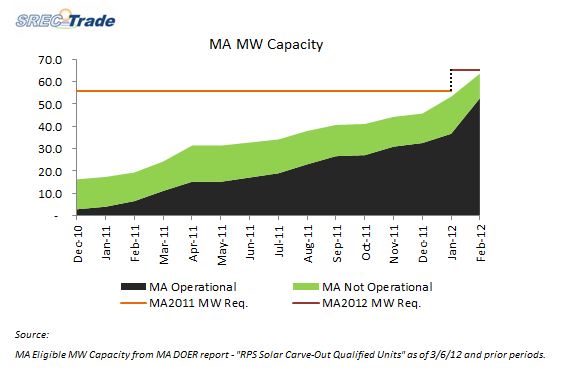 The total qualified capacity noted as of the update is as follows:

The table above demonstrates the amount of operational capacity as reported by the DOER based on the dates indicated. Note, these figures are (and were) readily available on the DOER’s public website.  Looking at the last 12 DOER reported periods (which we’ll refer to as Last Twelve Months, or LTM for our purposes), the average MW added per month was just above 4.0 MW.

Using the January 1, 2012 starting capacity of 48.3 MW and the March 6 operational capacity of 52.6 MW, we have inferred that on average 2.2 MW became operational in January and February 2012. The analysis below demonstrates 3 cases. In each case, a different capacity scenario is presented based on the average amount of added capacity over the LTM. Case 1 assumes only half of the LTM average capacity is added per month; Case 2 assumes the same amount of LTM average capacity is added per month; and Case 3 assumes two times the amount of LTM average capacity is added per month. Note, these forecast figures were derived simply based on historic rates. The figures do not take into consideration the amount of capacity currently in the interconnection pipeline. Many factors can impact these figures, including the timing associated with interconnection, changes in federal incentive policies, and pricing and liquidity in the MA SREC forward market, to name a few. 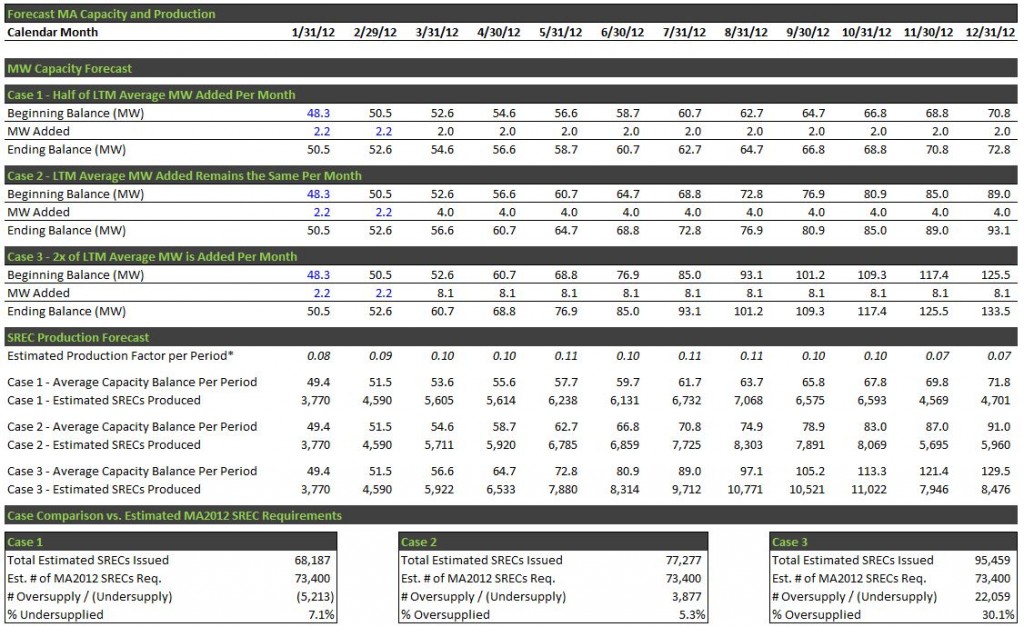 *Note the Estimated Production Factor per Period is based on a 1.13 MWh per installed kW per year adjusted for seasonal impacts.

Through the Q3 2011 issuance period (1/15/12), 19,257 MA2011 SRECs have been minted. Additionally, more than 7,000 MWh have been reported to the PTS during Q4 2011. The Department of Energy Resources (DOER) projects approximately 29,000 SRECs to be generated in 2011, leaving the market short approximately 33,900 SRECs. As a result of this substantial undersupply, MA2011 SRECs have traded close to the 2011 ACP value of $550/SREC. In recent trading, the MA2012 market has priced at approximately 65% of MA2011 spot prices. Additionally, bidding for multi-year forward contracts beginning with 2012 delivery is currently below the Solar Credit Clearinghouse Auction price.

Given the relatively smaller MW capacity requirements in the early stages of the MA SREC program, the installation of larger scale (>1 MW) projects can easily have a substantial impact on the SREC requirements. Looking at the various cases presented above, they demonstrate that the installation of enough >1 MW projects could easily tip the market into oversupply. Additionally, it is possible that commercial size projects ranging from 100kW to 500kW could have an impact as well. While >1 MW projects quickly meet the 2012 requirements, many of these projects take much longer to come to fruition. The design, interconnection, construction, and financing processes for these projects can take several months. Installers and developers in MA have recently noted that smaller, multi-100kW commercial projects are much faster from inception to power generation. It is common that these projects are financed using all equity capital or debt sourced from an existing banking relationship established and backed by a corporate entity’s balance sheet. Considering these factors, it is very possible the multi-100kW size category will have a meaningful impact on the MA2012 SREC market.

The table below analyses various size categories of systems and the number of projects installed and how these categories grew from DOER reported data as of July 11, 2011 vs. January 25, 2012. 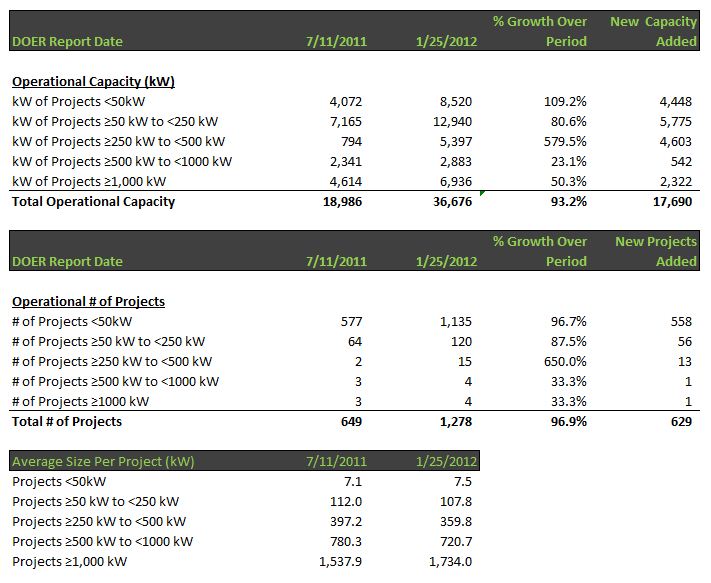 As demonstrated above, both the residential (<50kW) and commercial (>50 kw to 500kW) categories grew at substantial rates during the periods presented. Given these historic growth rates and the amount of current solar development interest in MA, it is expected that we will continue to see more growth in these size categories throughout 2012.