In October AEP Ohio announced a 50 MW solar project to be built in southeastern Ohio.  The facility will be developed by Turning Point Solar and the electricity and SRECs will be purchased by AEP.  The announced project will be phased in over 3 years, starting with 20 MW by 2013, 15 MW by 2014 and the remaining 15 MW by 2015.  This is not the first time that AEP has elected to procure SRECs from utility-scale facilities. AEP met its 2010 and 2011 SREC requirement primarily from a 10 MW facility built in Upper Sandusky, OH.

Although the announced project may still see some hurdles before all contracts are finalized and construction commences, the prospect of 50 MW worth of SRECs flooding the market in the next few years will likely have an impact on the growth of the Ohio solar industry. Ohio currently allows buyers to source 50% of the SRECs from out-of-state. Since there is more supply in the out-of-state market, prices will likely be lower than the in-state market. In 2011, the existing 10 MW project will represent 23% of the total market in Ohio, meaning that roughly half of the SRECs required from in-state will come from the Upper Sandusky project next year. In 2012, the Upper Sandusky project will represent 11% of the overall market, roughly one-fourth of the in-state market. Then, in 2013, when the first 20 MW of the Turning Point project comes online, the 30 MW available to AEP will represent 23% of the total market, again, roughly half of the in-state market.  These percentages increase slightly to 25% and 26% in 2014 and 2015 when the additional 15 MW tranches are turned online.

Although the argument can be made for the jobs created by the project and the progress towards the ultimate goal of solar energy, projects of these size can impact SREC markets in a way that could halt the development of a sustainable in-state solar industry. Other states have dealt with this issue in various ways that could hopefully serve as an example for Ohio to follow.

In New Jersey, up until 2010, facilities over 2 MW were ineligible for the SREC program. When the requirements increased to 160 MW, while the state only had 80 MW installed, the legislature passed a bill opening the doors to larger projects. This made sense both because New Jersey was so far behind and because the exponential growth in the increasing requirements made it impossible to keep pace without projects above 2 MW. The legislature also limited the ability of investor-owned utilities from building large projects, requiring approval from the BPU based on the projected impact in SREC pricing.

In Delaware, a 10 MW Delmarva Power project threatened to collapse the SREC market when it was still in its infancy. The Delaware Sustainable Energy Utility (SEU) stepped in to purchase the SRECs and take them out of the market. The SEU is a quasi-governmental organization that used its funding to support the SREC market. In response to this, and the fact that most Delaware solar owners were selling in Pennsylvania, the Delaware legislature increased the fines and requirements in Delaware in 2010.

In Massachusetts, the state recently voted to increase the ceiling on solar project sizes eligible for the solar carve-out from 2 MW to 6 MW. This increase was needed to help the state kick-start the SREC market which was well-behind the target midway through 2010.  Though the market will do very well for reasons stated here, the 6 MW cap re-iterates Massachusetts commitment to developing a solar industry, not just a few giant solar farms.

If more states could follow the lead put forth by New Jersey, Massachusetts and Delaware, the SREC program would be far more effective in promoting solar in a way that best benefits society. While the utility lobby would prefer to maintain the status quo of centralized power generation since generation and distribution are their primary purposes, the solar industry is best suited to promote distributed, decentralized power generation. If every SREC market were overcome by the generation of a few behemoth solar farms, each state would be left with several solar projects and a few successful developers, instead of an industry. Meanwhile, the states that temper the growth of utility-scale solar and focus the SREC markets on residential and commercial solar will see electricians, general contractors, roofing companies and heating & air conditioning companies build sustainable businesses around solar. This will lead to jobs and job growth far more effectively than the influx in short-term construction jobs created by the occasional 50 MW solar project.

Solar Capacity in the SREC States in 2010

SRECTrade’s State of the SREC Markets in 2010
The New Jersey, Pennsylvania and Delaware Energy Years came to a close on May 31, 2010.  The following is a report of the solar capacity in megawatts (MW) certified and registered to create SRECs in all states at that time.

Solar generators by state located: This table is based solely on the location of the facility and does not include multiple state listings. All facilities must have been registered by May 31st, 2010. 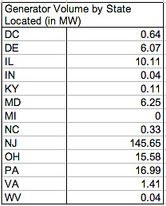 As you can see New Jersey has by far the largest amount of solar installed and eligible for SRECs with 146 MW. Pennsylvania is a distant second at 17 MW.  Meanwhile, Ohio and Illinois are third and fourth respectively, however of the 16 MW in Ohio, 12 come from one facility and of the 10.1 MW in Illinois, 10 come from one facility. Delaware and Maryland both have sizable markets at around 6 MW each. Volumes in other state are much smaller since there is no local SREC market.

Solar generators by size: Projects certified for SREC markets range in size from as small as 0.5 kW to as large as 12 MW, however, only 20 out of the 7,700 projects are over 1 MW.  Of those 20 projects all are well below 5 MW, with the exception of a 10 MW facility in Illinois and 12 MW facility in Ohio. The lack of multi-MW facilities in the SREC markets is a function of both the complexity involved and constraints on demand. The only state SREC market today with any legitimate appetite for multi-MW facilities is New Jersey.

Solar generators by state eligibility: Because some states accept out-of-state SRECs, the in-state supply listed above differs from the total supply available to buyers in that state.  For instance, Ohio’s market also includes facilities located in PA, WV, KY, IN, and MI.  The table below lists the total solar capacity in megawatts eligible for each SREC market, along with the percent of the market that is sourced in-state.  Note: many facilities will be counted multiple times in this table since they are eligible in several states. For example, the 10 MW facility in Illinois is eligible in both DC and PA. 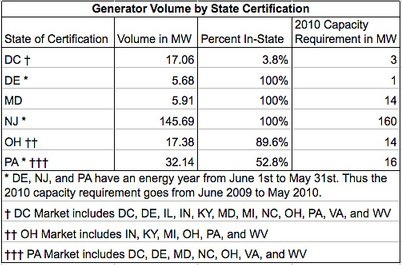 In Ohio 89.6% of the market is in-state SRECs. Some of our customers have asked why in-state Ohio SRECs do not sell at a premium because of the 50% in-state requirement. The reason is that, as you can see, buyers are not having difficulty meeting the 50% requirement with the large supply of in-state SRECs. In the future as the requirements increase, in-state SRECs could be harder to come by and may indeed sell for more than out-of-state SRECs.

Interpreting the data: One important thing to notice is that the 2010 Capacity Requirement column details the capacity required to be sustained throughout the entire energy year. The Volume column shows the capacity registered through May 2010. For example, New Jersey needed approximately 160 MW of capacity running on average from June 2009 through May 2010 in order to meet the 2010 SREC requirement. The state is actually farther away from the 160 MW capacity mark than the 145.69 MW volume would suggest.  Capacity in New Jersey grew approximately 65 MW over the course of the year and so there were probably only enough SRECs created to meet approximately 110-115 MW of the 160 MW requirement. That requirement increases in the 2011 Energy Year to approximately 260 MW. For more information on the growth of the New Jersey market and any other state market, please visit our page devoted to State SREC Markets.

Assumptions used in calculations: Solar capacity required is based on 2007 Department of Energy electricity sales figures, assuming a 1.5% growth rate. The resulting solar megawatt-hours required (i.e. SRECs) are converted to megawatt capacity requirement at a rate of 1200 MWhs per MW.